I've been really intrigued by the Des Moines are real estate market for some time now. Cap rates look great, crime is low, and the city itself seems to be booming as of late.  Seems like a great market for cash flow that has some strong appreciation potential.

That being said, I don't quite "get it". Most places in the midwest the population is declining - my immediate concern is whether or not this type of growth is truly sustainable. According to some articles I've read (link to one below), immigration is the cause for most of the population increase. For those of you who see strong appreciation potential in this market - why do you believe it's sustainable? I am planning on making a trip soon but having never visited I couldn't really see myself wanting to live in an area like Des Moines. Interested to hear everyone's thoughts.

Positives: Great jobs. Banking industry. Insurance industry. Agricultural industry (and I don't mean crop picking). Great educational system to raise a family in, and very good colleges. Cost of living much better than San Diego. Much, much, better. People in the Midwest are extremely friendly, especially when compared to the coastal cities (I've lived on the coasts as well). Commuting to your job is easy. Affluent suburbs that don't cost as much as other major metropolitan areas. Entertainment is actually pretty good here. Hamilton touring company came here (only 1 of 13 cities in the nation). Triple A baseball, minor league hockey, concerts, plays, etc. One of the top arts festivals and farmers market in the nation. A 3 hour drive to either Minneapolis, Kansas City, or Omaha. A 5 hour drive to Chicago. Very cheap flights to Denver, CO. Bike trails everywhere. Great areas for hiking. Many very good breweries popping up with some great beer. The food here is incredible, and cheap. The Iowa pork chops are thick, juicy, delicious, and about $2 a pound. Steaks from the local butcher for $7 a lb. If you're vegetarian, I can't help you. Lol.

Negatives: Weather, of course. It's not brutal here, but if you don't like it being 10-20 degrees for a few months, you'll be miserable. On the flip side of that, the change of seasons is pretty nice, and a lot of people here like a change of seasons every few months. Transportation can be difficult if you don't drive or own a car. Many young people question the entertainment choices here, especially when compared to major metropolitan areas in the nation. You don't have the natural habitat views here like the oceans, mountains, etc. that you would have in California or Colorado. Taxes are actually pretty high (but that also goes back to educational system being very good). Both income taxes and property taxes are pretty high when compared to the rest of the cost of living here. Lack of diversity. You go to the suburbs and there is extremely low diversity.

Hi @Anthony Wick , great points from an area local. However, I'm still concerned that this recent population growth is only temporary.

The national trends show people moving south and west but Des Moines seems to be bucking that trend, at least for now. It's difficult to get a sense for realistic appreciation potential when so much of the growth has bee driven by immigrants and therefore will likely come to an end.

I gave many reasons for why Des Moines is a good place to live. None of which had anything to do with Immigration. Boots on the ground. Not a national trends chart. It's like buying anywhere else. If you buy well, you'll profit. People are not suddenly going to not need a place to live. The stock market has been stagnant this year. Zero gains. What will it do tomorrow? Nobody knows. So you invest wisely and consistently. I recommend the same in real estate. You've talked yourself into buying south and west. You should probably do that.

I have family that lives in Dallas County, so what I am about to say comes second hand and anecdotal.

A lot Des Moines's (DM) population growth has been from other Iowans moving to the metropolitan area and not so much people moving into the state.  My understanding is that Iowa has had a population of around 3mm for quite a while, but DM and its suburbs (Waulkee and Ankeny among others) have certainly expanded quite a bit over the past decade or two. At some point the state WILL need immigration from other states in order sustain its growth, but I don't know when this spigot from the other parts of IA is going to run out.

Companies like Amazon have invested quite a bit of money into warehouse space in and around Des Moines for server farms.  That converts to some really nice jobs, but not a ton of them.  Like Anthony mentioned, DM has a thriving banking and insurance industry based around farming operations.

Schools; IA has always prided itself on education.  They have some excellent teachers and excellent schools especially in the suburbs.  But there are some schools in DM proper that are awful (like worst in the nation bad).  Make sure to look at your school district if you're investing in DM.

There is a ton of money being spent on building new units.  A lot of farmland around DM being bought up and then built into condo units and/or developments and strip malls.  I don't know if this is translating to oversupply of rental units or just merely meeting demand.

@James Lloyd   Ankeny is the 4th fastest growing suburb of 50,000 plus population in the nation. And you're right, there are a ton of condo/townhome units being built here. 2/2's are going for $1,450 month and higher. Downtown Des Moines has big growth of new condos as well. Very expensive. I've been buying existing duplexes and getting about $1,400 for 3/2's.

@Alexander Sobrado - There isn't a secret sauce but I can tell you as a relatively recent transplant into Des Moines (moved from Chicagoland to Bloomington IN to Davenport IA and have settled in DSM for the last almost 5 years...).  There is a lot to love here that won't be quantified in traditional stats/logic UNTIL you come check out DSM for yourself... I couldn't "see myself" living here either, but now I cannot see myself living anywhere else.

The city itself emulates the Midwest nice that you hear rumored on the coasts.  The DSM Metro does a nice job of keeping clean and hosting multiple "touristy" events annually... for which the locals EAT UP.   Weekly farmer's market, multiple LARGE cultural festivals, a sufficient music scene draw, some minor league sports arenas (Hockey, Basketball), and a flourishing LGBTQ+ community to boot.   Oh... traffic is a non-issue!  It takes me 15 minutes to get about anywhere and... we have a quote unquote international airport with a less than 20 minute expected wait from car to terminal.  For you fancy folks, we also have a few private airports!

I would agree with some of the previous comments, a significant amount of the DSM growth has been the metro draw from more rural areas of Iowa.  It is ALSO coupled with immigrants coming over through refugee services as we are one of a select number of "cities" elected by the powers-to-be as such.   However!  There is also a ton of out of state folks coming here for the opportunities that exist.  The barriers to entry for success (even out side of real estate) are minimal for people with a dream, which literally echoes the "American Dream" of the former eras.  As a whole, there are less politics involved when trying to making things happen.  Networking is an easy-to-access bonus, both inside and outside of Real Estate with a lot of folks that truly just want to help each other grow.

From a local level, we are conveniently positioned between the arguably two most important spots (per the Iowa natives): Ames and Iowa City.  #GoHawks!

Last but not least in the "why DSM" bucket you have your traditional three motivators: low cost of living/affordable housing, access to well-paying jobs, relatively safe neighborhoods, and decent schools (I recognize, that is technically four and a half but I am rolling with it).

Is the market sustainable?  I would argue that the City of Des Moines is realistically more sustainable than the coastal tides on any day of the week.  Cash-flow present day surpasses the coasts (dollar for dollar) with a bit of common sense.  Where the argument breaks down for most real estate investors is the "spike" appreciation that they are accustomed to reading about in Guru blogs and seeing on the coasts ALONG with the scale of investments available.  I foresee our markets continuing to move forward, at a gradual and safe pace, but I doubt we will ever see the massive spike that the coasts have, for better or worse.  There is still room to grow here, but it will eventually level off.

Hey Alexander thanks for bringing up this topic.  Full disclosure, I'm in Des Moines and pretty well vested as I moved here 4.5 years ago and we have a nice little portfolio of real estate.

Your question really got me thinking and I've been researching the population growth, and specifically contributors of immigration the last hour or so.  I feel it's a good question because understanding the causal factors may give us a window into more of a predictive world.  I have a high interest in nailing this one as we have made decisions with the confidence in the Des Moines macro picture being solid.

Here's a few observations in speaking to your question:

I'll get back to you with any further info on your immigration specific question that I find.

I do think we (those that are investing in DSM) need to be careful to not 'drink the cool aid' but at the same time - the original link you provided does not paint the picture that I'm used to hearing/seeing.  Hence, the need to investigate more.

Check out this image...it Establishes growth rate by city, and Des Moines proper has only been 3%.  Every resettlement I participated in was in Des Moines proper, and if that's representative, then a change (reduction) in immigrant inflows would not impact the surrounding suburbs.  Of course growth of a metro is impacted by both the area proper and surrounding areas... 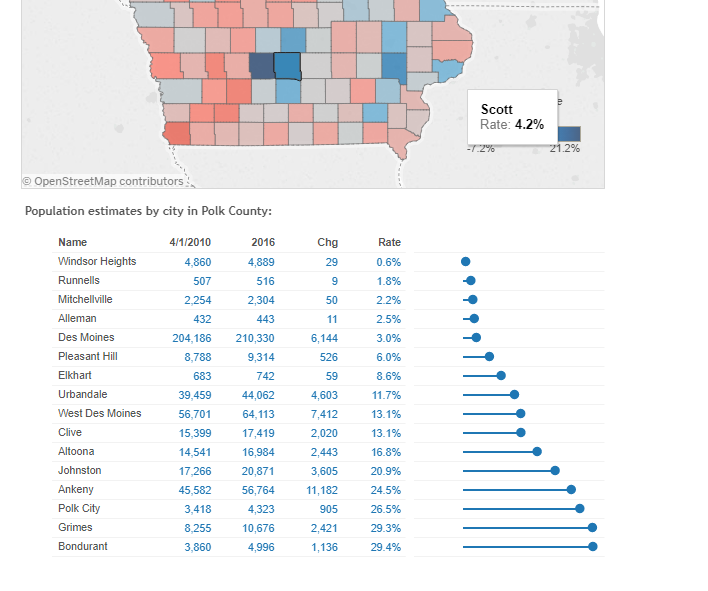