I am STUCK in escrow on a fix-n-flip in West Commerce City (unincorporated Adams county), which is just north of downtown Denver. I am told the court paperwork will take another 3+ weeks process (close around 5/20 I guess). Long story short, wholesaler gave me the OPTION TO BACK OUT and would refund my deposits & earnest money of $8k (I'm inexperienced at how title will deal with reversing closing, waiting to hear back).

My ARV calculation is the only thing that may make me want to jump ship, as well as opportunity cost of missing other deals while just waiting for this to close as it could take longer than 3 weeks.

Numbers on the deal can be found on the attached screenshot from the bigger pockets flipping calculator. I feel these numbers are VERY conservative... I'll leave it at that.

Would you do this deal? 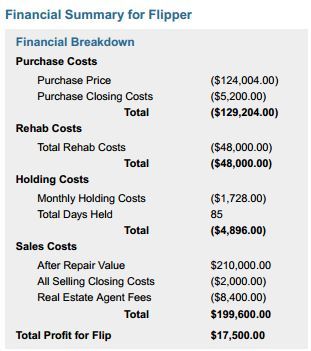 Uhhh I'm basically a newbie so don't listen to me, but that seems like a really slim margin that could get eaten up fast if there are unexpected, surprise costs...plus you're saying it's a conservative estimate.

but I can say for sure that I'm looking for a lot more meat on the bone than 17k for my first flip, as I want to give myself PLENTY of room to screw everything up...haha.

I'm looking for a nice healthy 30k margin.. if I'm going to spend the time and take the risk, I want it to be worth it!

@Steven Silva so my thought is this. You really didn't disclose what you are doing with the $48,000 in rehab money. You only have 85 days of holding costs. About half of that is after it would be listed. That leaves you with 1.5 months to spend $48,000. I find that nearly impossible. Your contractor would have to show up the day you close and use multiple subs to spend that much money in a month and a half. $48K is major rehab. Probably electrical and plumbing as well as a kitchen cabinets. All of those have long lead times and what about failed inspections. I just don't see it happening in that time frame.

Why does the wholesaler want to let you out? That is unusual. Has he lost the deal and just doesn't want to tell you? People don't usually give up a paycheck that easy unless they have something else that is better.

That's a tight margin but I looked at your profile and you say you have a reliable GC that works quickly (a unicorn perhaps? :), so that's a HUGE plus. My thoughts are that if you are confident in your $48k rehab (i.e., it's conservative and has a small contingency) and your ARV is also conservative, then a 13.5%, 90 day project return is decent in Denver. From the home's data it looks like it's now a 2/1 and so, you'll add 2 beds? If so, beware asbestos since it was built in 1965.

Hi Steven, i wouls say that your ARV is low in Colorado. List price might be 210 but if it is done well you can see that price rise quickly. The market out there is crazy and getting it full exposure will ensure that you get more than list price out of it.

I seen this deal come through. I wouldn't touch it. Too low margin and not the greatest area.. If you can get your rehab costs down then maybe it would be worth it.

If it needs $48K in rehab it must be a total disaster! That's not the kind of flip I'd go for, but it sounds like you are buying a really terrible experience. For that kind of effort and work needed, I'd want to make more money than $17K.

Thanks guys. Just wanted to get an idea. I meant conservative, as in I believe the rehab to be below $45k probably less, ARV to be above $215k, as high as $222k. My contractor does have multiple subs. I worked with him through previous job I had, He was able to turn 10 houses a month for 2 years, so yes $45k is a large rehab, but I've seen him do that in 4 weeks.

The wholesaler is a reputable one, and has never had this happen where a deal is stuck in escrow. They do a lot of business in Denver. They feel their reputation is on the line and offered to refund my money because of that.

I'm just not sure, other than it wouldn't go for less than $210k. I put my agent out there to connect with the under contract homes to try and get info on contract prices.

I like your persistence. A lot of people might get scared by this deal and they might be right. It may be tight, definitely don't make a habit of doing deals this tight all the time but believing you can do it is half the battle. the 2nd half is working with the contractor to shave that 45k down to 35k or seeing if he will take a back end cut for at cost renovations.

Anyways definitely keep  running ideas past this website. I did early on with a few deals and got destroyed similar to how you just did about everything I hadn't taken into account and how bad of a deal it was. I don't think I ended up doing that deal but it did teach me a lot about all the things I was missing. That's why I love this website, nobody is afraid to tell you their opinion, and a lot of people here are realists/pessimists hahaha so it works out great for getting feedback

Keep up  the hustle.

Feel free to reach out if you have any other  questions.


I seen this deal come through. I wouldn't touch it. Too low margin and not the greatest area.. If you can get your rehab costs down then maybe it would be worth it.

I figured a lot of people saw this. So, when they didn't get any offers on it in the first week, I offered $15k below their sale price and they took it. I also have faith in my contractor. I agree the area isn't great, but was surprised by the numbers and I've seen a scrape and build in the area that I'm trying to get more info on. What kind of deals are you looking for?

@Steven Silva Will PM you and we can chat.

@Steven Silva Did you ever speak to an attorney about all of this as I mentioned in your other thread? Curious about what they may have said happened.

@Matt M. My guy is out of town until Monday. Do you have a recommendation for someone in Denver area?

@Drew Fein is an attorney and a member on this site. I'd reach out to her.