*This link comes directly from our calculators, based on information input by the member who posted.

Looking for expert advise for this duplex in 53207 in Milwaukee WI. Went thru @Dawn Anastasi's book and that says it is close to Bay View which is a B- area, but what about this neighborhood?

Shows a decent area in Trulia but income appears to be in mid 30K annually- refer to justicemaps.org.

Duplex has both floors rented currently and is cash flow positive at this time. Is it advisable to take this deal at this time? 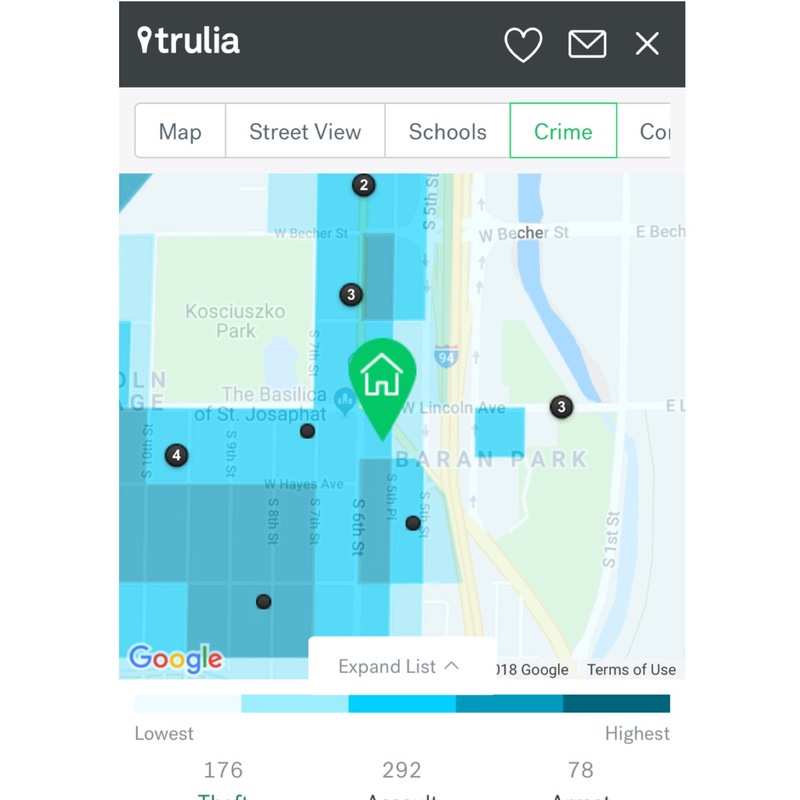 @Abhay Sachar have you been to Milwaukee? I would recommend you spend some time in the blue shaded areas, so you get a sense of what you are getting yourself into. You can also click on the little dots on the crime map and it will state what happened i.e. shots fired, trouble with subject, theft, vehicle stolen, burglary etc along with a date.

Also, the boundaries of these maps are somewhat fluid. If the guy with the gun walks three blocks further before someone looks at him the wrong way, then you the blue area will shift. Trouble is mobile. Don't fall for the idea that just because a property is in a white area, 3 houses outside of blue, it is safe.

@Abhay Sachar, I agree with @Marcus Auerbach.  I would spend some time in the city, particularly the crime areas, before buying something in those areas.  I went to an event at that church at night a couple of years ago and didn't feel that bad.  Of course, I only walked two blocks.  I wouldn't want to be there all of the time, though.  This is a rough city.  There are some areas that I don't like driving through during the day and I've spent a lot of time working in the projects in other cities.  In fact, I live in the nicest part of the city and I won't park my car outside.  Cars are stolen almost daily and people are occasionally mugged in broad daylight at gunpoint.  Amazon packages are regularly stolen off of porches.  I also occasionally have random people come to my house trying to intimidate me into paying them to do odd jobs.  Again, I'm in the nice area where homes range in the $400k-$600k range.  I hate to think what's going on in the $30k neighborhoods.  We're in a tough spot currently.  We have an understaffed, underfunded and possibly undertrained police force.  We also have a political climate that is anti police, especially in the neighborhoods where they need the most police involvement.  This is one of the poorest cities in the country with an absolutely horrible public school system and high inner city unemployment.  We have a failing infrastructure and no money to fix it.  I see the bad areas getting worse before they ever get better.

I hope this doesn't sound like a political rant because I don't mean for it to be.  I'm just trying to give you my picture of the city.  I want to make you aware that when you decide to buy cheap properties in the worst parts of town, you are getting the worst of the worst of a struggling city.

Before Marcus kills me, I also want to say this is a great place to live (if you can deal with the weather).  My wife can be in her office downtown in less than ten minutes, I can get a reservation at the best restaurant in town the same day, and I can go from my couch to my seat at a Brewers game during rush hour in 25 minutes.  Private schools are cheap and are very good, for the most part.  We also have very good public universities.  Summer is one big beer fueled festival.  It's a cool, easy city.  Heck, even if you live in the suburbs, you are less than a 40 minute's drive from downtown.  You can be in downtown Chicago in 90 minutes by train.

Oh, and make extra sure your capex and maintenance numbers are solid.  I haven't seen a cheap property yet that was well maintained.  Someone sent me a wholesale "deal" last week on a $30k house that they would have had to pay me to take once I figured in basic renovations.  They also tend to be really old and full of lead.  Foundation issues are widespread due to faulty drainage and the cold winters.  Good contractors here aren't cheap and are hard to find.  Bad contractors aren't cheap and are slightly easier to come by.

Full disclosure.  I do not own investment property here, but I'm actively looking.  I also have only lived here for three years.

@Abhay Sachar - I'm not an expert, but I've done a few flips and currently own two duplexes Milwaukee and agree with the earlier posts.  Risk-preference is all relative but this would be outside of my personal tolerance and I'm actually doing deals in a few rougher areas on the South side of Chicago.

Cashflow is "great" but it's an older building with a lower-class tenant so cap ex will sneak up on some time.  More importantly, there will be high turnover which leads to turnover costs, more repairs, more leasing fees and just way more headaches - especially when you're supposed to be passively investing from across the country.

Everyone's strategy is different and I'm sure there are people making good money on these types of deal.   For me, I prefer the B to C class neighborhoods up North (Vahalla, Hampton Heights, Capital Heights...etc) where I can still get the 1.5% rule in today's market, and have far less headaches.

I would echo @Marcus Auerbach   and @John Fedro that you should make a trip out there.  I know that's easy for me to say because it's a 90 minute drive for me, but if you're going to drop 45k on a questionable neighborhood, you should spend the 1k to visit and get a feel for the area.  I'd also recommend syncing up with a reputable property management group and bouncing potential deals off of them.  I currently use  http://mkereis.com for my duplexes and they are very transparent and so far so good.  I always show potential deals beforehand and they give their honest opinion on the area, what rents will go far and they've even shied me away from a few deals I was considering because the math looked good but the area was iffy.  Hope that helps and DM me if you'd like more info.

@Abhay Sachar As said earlier your cash flow is very good. WIth the monthly expenses what they are and no mortgage you are taking into account vacancies, repairs, any services you would pay for etc. Your buying the property as is and it doesn't need any repairs/renovations?

@Doug Haisten - It does need rehab work. I am buying as is.

Thanks for the pointer to the PM company, @Tom Shallcross and great advice! Will be in touch with you shortly!

Appreciate the feedback, @Marcus Auerbach and @John Reynolds - will definitely visit Milwaukee before getting into the deal

@Abhay Sachar Why are you not showing the renovation cost in your analysis?

@John Reynolds thanks for illustrating the crime issue! I think this is valuable for people to read!

There is a reason why someone would sell a house that would cost 200k or 300k in sticks and stone for 30k or make it 80k. And that even includes the land!

Also, we have crime tourism - the bad guys have cars and they go into nicer areas to "work".. pays better. So you think you are safe, because you are just outside Trulia blue? Think again!

Cheap rentals are often fools gold! The cash flow numbers look awesome and it's easy to get in with a few bucks. Show me your capex plan for the life time of the investment.

Here is what I sometimes ask an overly excited out of state investor: if it would be that great, why do you think the seasoned local guys with the deep pockets are not all over it? Do they know something you don't??

Log in or sign up to reply
Related Resources Real Estate Deal Analysis and Advice
The 2% Rule: Fact, Fiction, or Feasible? (Updated 2021)
Is That Neighborhood Up-and-Coming? Here’s How to Tell
Do Your Due Diligence Before Digging Up Dirt: Investing in Vacant Land 101
Best Deal Ever: How a Postcard Gets the Phone Ringing
Meet the Investors: I Sold My Wife on House Hacking With a PowerPoint (& Soon We’ll Live for Free!) Featuring Joaquín Camarasa
Resources Read, see, and learn more!
Real Estate Investment Calculators
BiggerPockets Blog
Path to Purchase
Mortgage Loans
Find a Contractor
Real Estate Agents
Hard Money Lenders
Real Estate Listings