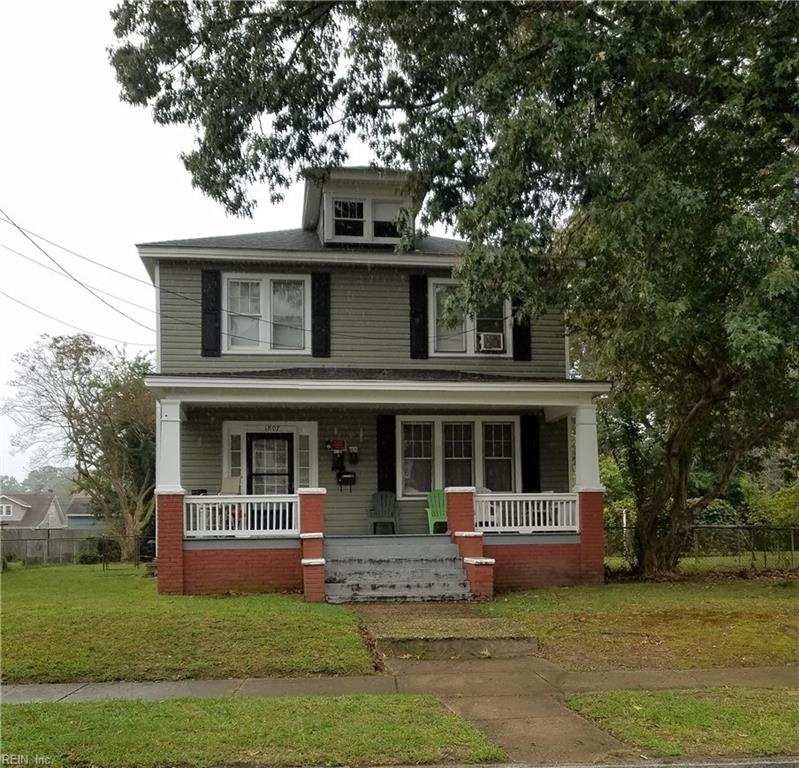 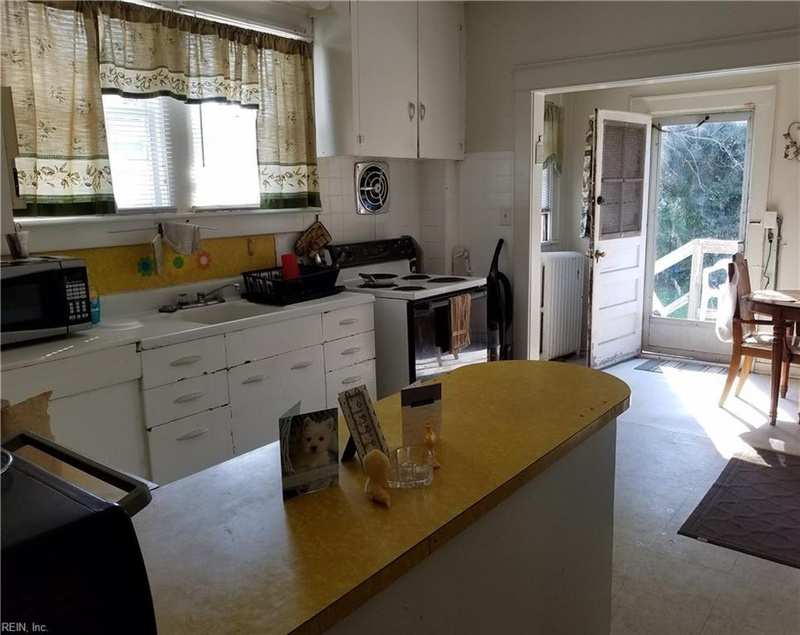 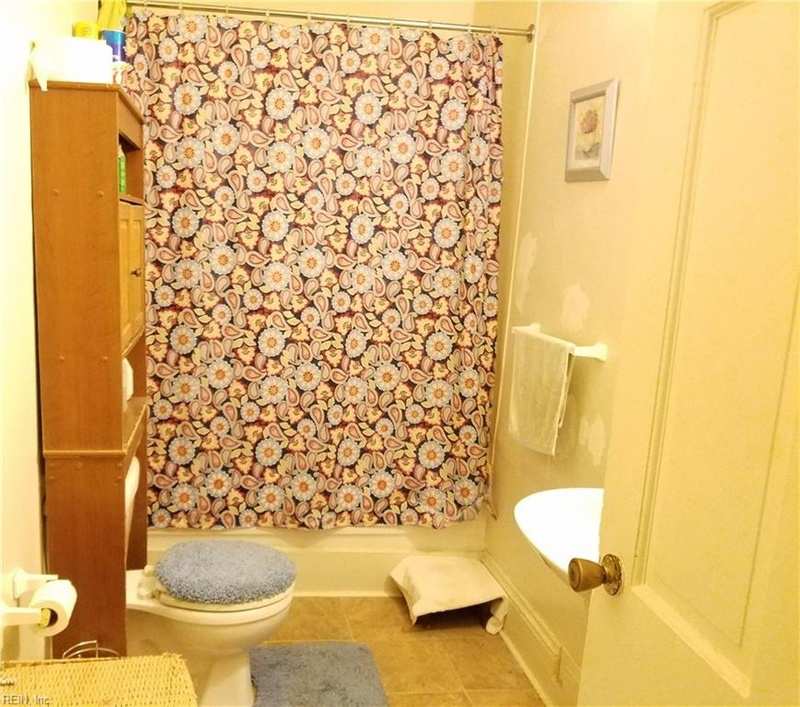 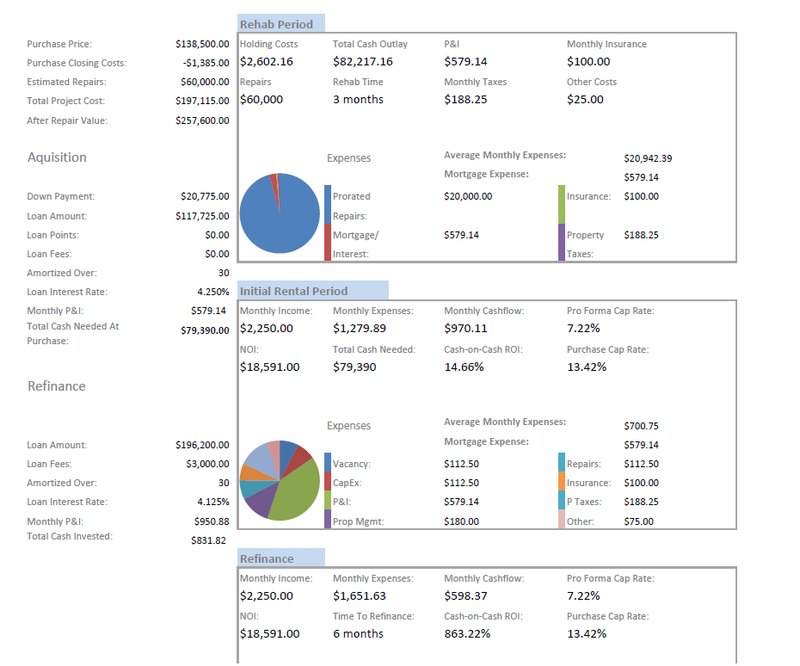 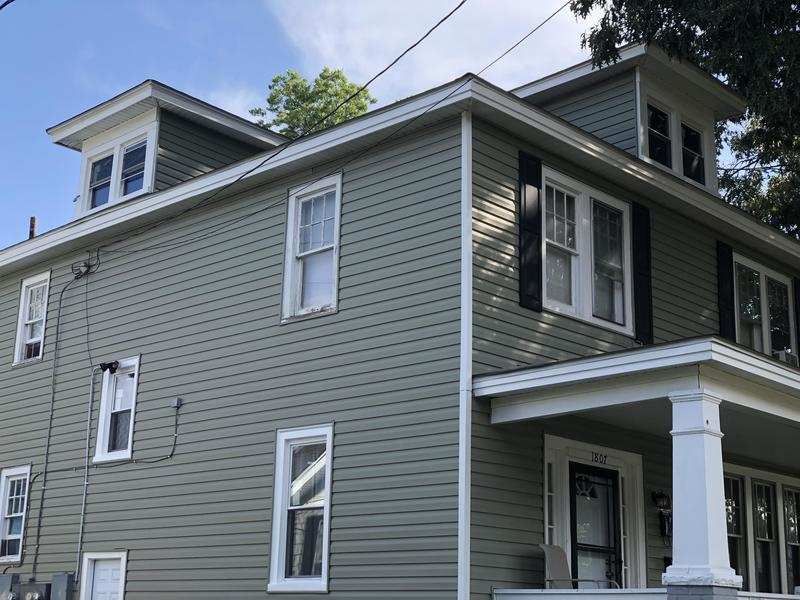 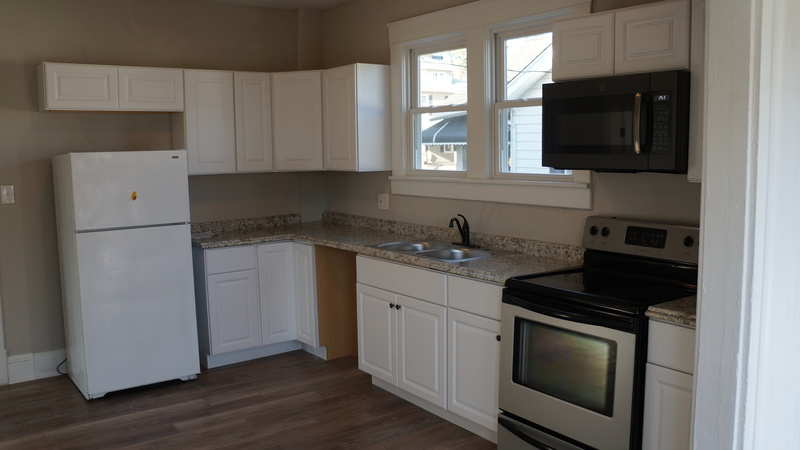 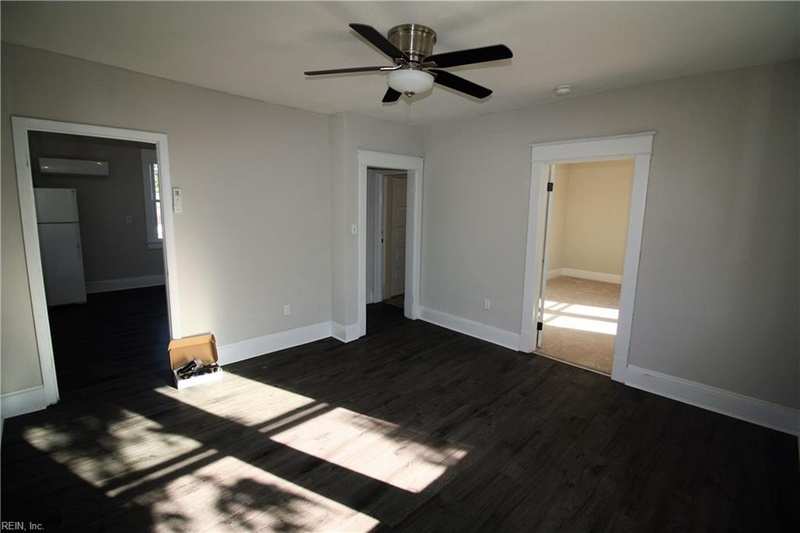 RENT: We did a little non-standard rental here. Since it was already rented out, we had to get creative with the rehab and renting.  and We started with the exterior, landscaping, and new HVAC and windows.

One tenant was evicted for non-payment, so we renovated that next. Then asked if anyone was interested in moving into the newly rehabbed unit while we renovated theirs. This worked for the other 2 units. All are re-rented now (2 to origional tenants) at the prices reflected below 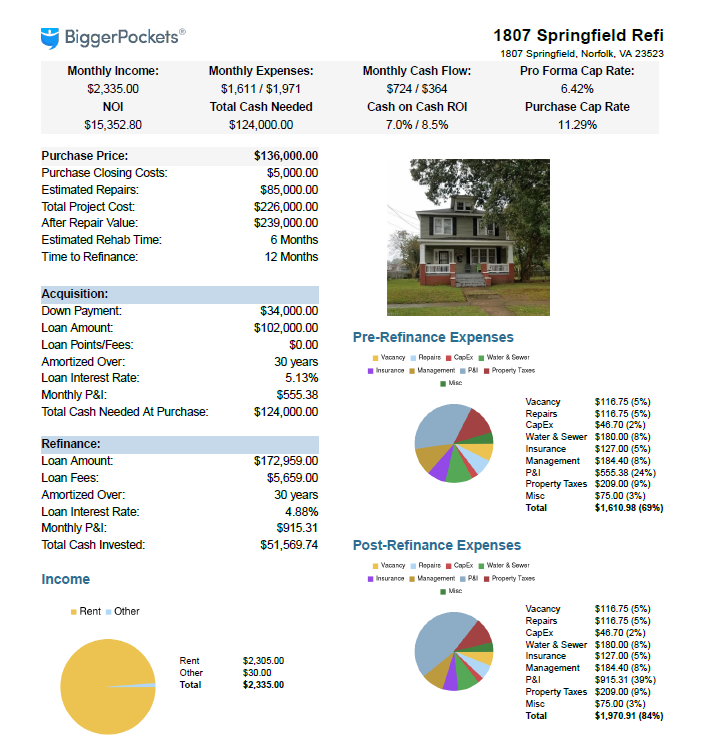 REPEAT: As always, there are some errors I want to improve upon for the next. I hope this well help some others. Systems will go into place to prevent repeating errors, and repeating what was successful,

1) Purchase price too high. I bought this off the MLS, I think I could have negotiated it lower, and in the future will look to more off market deals. I don't regret buying it, as a learned a ton and it still cash flows nicely.

2) Under estimated rehab budget. It was originally built in 1920s. So HVAC costly much more than I budgeted. It was worth it to attract a higher quality tenant, remove the window AC units, and get the tenants paying their own utilities. Next time I'll know whats involved in an older home and have a better estimate on rehab costs for HVAC. (side note: ductless mini-splits are highly efficient and cheaper to install than a full vented system in an older home. Just make sure its a moderate climate as they don't provide tons of heat in cold winters.)

3) Not understanding all the ways an appraiser can appraise small multifamily (read: overestimating ARV). I used only the $/sqft method to find an ARV for this property. ARV is arguable most important number in the analysis. Since I was off by 20k, I left 20k more in the deal than I wanted to. The appraiser used a combination of $/sqft, $/room, and $/apartment. They then averaged the three. My $/sqft was right on, but the other two were lower, bringing the average down.

Congrats @Sean Rooks ...learning is the biggest part of this business, even in the errors you still come out on top. Good job.

@Sean Rooks This is a great breakdown of your first multifamily BRRRR. I hope to get to do this one day with a single family unit in Hampton Roads.

I would like to use your breakdown as a learning opportunity. How long did it take to prepare to my such an investment? Did you already have the financing (down payment, pre-approval in place well beforehand? Did you already have a contractor in place prepared to do repairs? I'm really curious because it seems like it all came together very well for you and you come off as an extremely prepared individual.

@Sean Rooks great breakdown. Seems like the lessons you learned will pay you back multiple times. Certain appraisers will use different valuation models, and it helps to learn what may be considered the "norm" for your area so that the next time you're that much more prepared.

Are you looking to stay primarily in the small multifamily space for your BRRRR deals?

@Sean Rooks congrats your in the game now my friend!!!! How fast can you get to deal number 2 don’t lose momentum!

@Sean Rooks What software did you use to do your projections? I like the layout of what you showed in the included pictures

Good job on the first deal.

Thank you all for the kind words!

How long did it take to prepare to my such an investment? I started listening to BP Podcast about 1 year prior to purchase and started combing the MLS 6 mo prior, this was about the 100th property I analyzed, 7th I offered on, and only accepted.

Did you already have the financing (down payment, pre-approval in place well beforehand? Yes I had a pre-approval ready to go, I also had the down payment saved up. As for repairs I used 0% interest Credit cards for half(be careful here, as I had plenty of income to offset if this went wrong at the refi) as well as a a private money loan from a partner.

Did you already have a contractor in place prepared to do repairs? I did have 3 recommendations on contractors and got a bid from 3 then picked the best. Tons of lessons here too, in the future I will have signed contracts, and trim down my SOW to what will actually be a return on my investment.

Yes, I can clarify. The appraiser used a combination of 'methods.' He picked his 3 comps of other small-multis in the area, then, adjusted them to make them similar to mine then:

1) He found the price/sqft of each comp

2) He found the price/room of each comp

3) He found the price/apartment of each comp

He then used those prices to find a value for my property by each method. Lastly he averaged those 3 numbers to arrived at my assessed value.

I am looking to expand to 6-12 unit properties for the next BRRRR!

For the original analysis I used my own excel sheet I created mirroring the BP BRRRR calculator. For the refi, I became a PRO member and used the BP calculator.

What kind of loan did you use to fund the initial purchase?

@Sean Rooks - it's all about momentum.  Keep it up.  If you need any advice on growing, message me.

Great job! Next one will be extra bases!

@Sean Rooks congratulations on your first BRRRR investment. I like the way you break down the details in each BRRRR it give us the complete picture of what it take and what the process look like. Do you feel that it take about a year to prepare for the first BRRRR investment? Have you read the BRRRR recently published book? One of the most challenge in BRRRR strategy I'm learning is refinance aspect. Finding the right lender who can refinance with LLC. Do you refinance in your name or LLC?

I used a conventional 30 year loan, 25% down, at 5.125%. The property was in good enough shape at the purchase to qualify, so it made the most sense financially to get a low interest loan, especially since the rehab was going to take almost 9 months doing 1 unit at a time with moving tenants in between.

I do think a year was a good amount of time to study and learn, establish some contacts and get organized. If I was at it full time, maybe sooner! I have not yet read David Greenes book, but its definitely on my list. Mostly I used the Podcasts and forums to gain BRRRR knowledge. I explored a few local banks, and was ready to refi in my LLCs name with a commercial loan. However, I found a different lender at a local Meetup (thanks @Melanie McDaniel ) that offered a better rate, and a quick refi. Though it is in my name, I'll transfer to an LLC soon and take the 'due upon sale' risk.

@Sean Rooks thanks for the detailed breakdown! Super helpful as I try to learn more about the BRRR method.

Two questions for you:

- You mentioned that next time, you plan on looking "off market" rather than using the MLS. What would this look like exactly?

- How did you estimate rehab costs? Did you have a contractor do a walkthrough? I know that you mentioned that you underestimated costs due to age of the building, but any learnings from a process perspective (in terms of how you estimated cost) that you took away?

@Sean Rooks - Congrats on your first investment! I purchased my first multi-family property in Norfolk back in 2013 off of the MLS and share a similar experience with having overpaid to acquire the property. Nevertheless, the knowledge I gained taking that approach was invaluable as it completely reshaped my strategy moving forward and I'm sure it will have the same effect on you. Considering that we are operating in the same market, here are a few pointers that I would like to offer:

1. Whether it be the MLS, pocket listing, or wholesale deal, CASH IS KING! If you make your money when you purchase a property, positioning yourself to get the lowest price (by making a cash offer) is ideal.

2. The local credit unions are a GREAT source for your cash-out refi needs. Contact the Business Services department, tell them what you want to do, and they'll lay out their terms. You can get up to 80% LTV in your LLCs name, and 90% in your own, depending on the institution.

3. David Greens book on BRRRR is a great read. It will help you refine your approach.

This is really helpful for us to see a play by play. Im almost there hope in the next 3 months ill be able to compare some notes! I think more than a base hit due to the experience and Knowledge gained!

Best of Luck and keep it up bro.

Way to Go Sean!  That is such a CUTE tri-plex!  You did a great job!  You provided a great review and I am sure you learned a ton for your next one!  Congrats!

Great notes on the re-fi and keeping tenants in there helped keep holding costs down even if it delayed rehab time.  Awesome!

Congrats @Sean Rooks, good job and thoroughly managed by the look of your paperwork. Moving the tenants around within the property was a creative idea. Keep it up!

Thank you for the great detailed break down!

Great Job! I am currently in Richmond looking for a rental property. Nothing really seems to be in my price range of max 20k. But this very inspiring.