Top Subjects:
Rentals, Real Estate Finance, and Traditional Financing
Hey guys, so I'm looking at a property, 4 family, that's been on the market for over a year. raw numbers look good, and its fully rented out. My question is what should I be looking for as to why its been on the market so long? it is in a fairly bad neighborhood, c- type area almost d area. There's no photos except for the front of the place, So maybe structural or foundation issues? anything else I should look out for when doing my due diligence?
Log in or sign up to reply

If the property is overvalued its either one of two things. Seller asking an amount too high, or the property has a perceived "flaw." The flaw could be something you cannot change such as a railroad in the backyard or next to a cemetery. Or, the flaw can be a value add opportunity for you to fix and reflect in the rents/value.

My guess is that "IF" this was a fixable flaw with value add it would have been picked up by another investor within the last year. This can also be a large repair item that generates no perceived value such as foundation, extensive mold, etc.

I would offer low and where it works for you. Ask if it has fallen out of contract in the past. If you ask, the listing agent will more than likely be honest with you (somewhat.) If you go under contract make sure your due diligence reveals anything past investors could have found.

Look not just at rent rolls, but past taxes as well.

You answered your own question--

2. no photos--so what do you imagine the insides of those units look like? They must be a disaster. You must gain access to all units and all parts of the building (attic, basement, etc) before making an offer on this one, try to bring a GC or home inspector with you to give you a very rough estimate on costs. You will likely learn something about the renters as well when you see the units--could be that the landlord is trying to "sell" the renters to someone else as much as he is the property itself.

Seven odd years ago I watched an o/priced 1870's duplex (large 3bed/3bath units) for 18 months in a C-B area. It was in very poor shape & the majority of offers included the need for conventional financing that subsequently denied it based on the poor condition. The Price would drop occasionally but the owner (recent heir) then lost the last tenant, so we thoroughly inspected it ourselves & my 'can't swing a hammer' partner offered them $38k less than the original asking price (CASH, no conditions) & we were told to 'go forth & multiply'. 3 weeks later our offer was accepted. We flipped it 'as is' for $25k more & hold the note @ 12% & the borrower completely rehabbed it. The old barn had a 1920's vehicle in it with one side full of bullet holes & we discovered that the double lot was 800 ft deep.

Here's the b4/aft of the main floor kitchen he did. 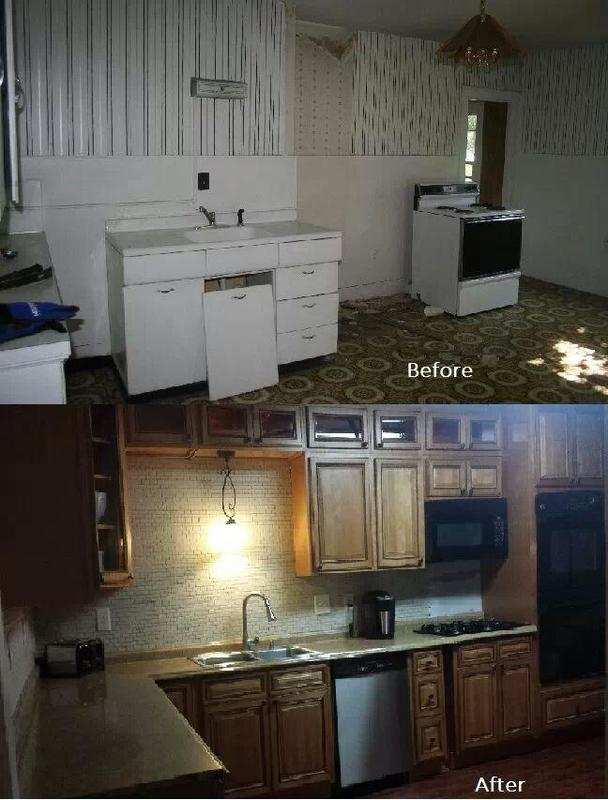 On another we toured a C-B area 1920's home that had been in foreclosure for 7 years ($98k was owed). The kid we were financing saw potential so our agent called the bank in Texas & we held a conference call in the 1600 sq ft ranch. It had beautiful hardwood floors & built-in cabinetry with old lead glass doors & an old butler pantry with the same glass doors etc.

We found out that the last offer of $28k was denied conventional financing because the home had a poorly built addition with mold on the ceiling. We got it for $21k & the kid restored all the woodwork & floors. He has since bought another from us in a C-B area, renting the previous one & has begun his RE portfolio. We hold both notes @ 12%.

5 years ago we bought a mixed use commercial that returns 28% (hold it contract for deed) in an area I wouldn't go to without a Swat team.

Top Subjects:
Rentals, Real Estate Finance, and Traditional Financing
@Justin R. @Jennifer Petrillo thank you for the responses. I'll go check the property and keep an eye out. I think you're right I probably did answer my own question. I should be able to check out the property next week and make a decision on that.
Log in or sign up to reply

Just because it sits doesn't mean you can't get a deal or that something terrible is wrong. It's ugly. It's in a bad area. Very few buyers are looking for that. And the investors that do aren't necessarily on the MLS.

3) something in the units inspection

Mike Baxter
Somewhere in the Scorching Heat of AZ
5.55
Score