Hi all, For those in the Bay Area we’ve seen some crazy price hikes. Do people get the sense that the market is starting to cool off? I have seen a few articles about Seattle’s markets starting and would like to get your feeling/data about the Bay Area. Thanks in advance
Log in or sign up to reply

@Doug Dattawalker - I live and breathe SF real estate 24/7 (since it's what I do for a living), and I can confidently say that the overall market isn't really cooling off at all here. While people may be waiting for there to be a "crash" here, it won't happen. We are due for a slight correction, but those generally quite nuanced and they happen on a neighborhood-by-neighborhood basis (example: the prices drop 2%-5% for a quarter or two in a specific neighborhood).

Q2 set a benchmark. 1/3 of all SFH sales were sold for $2m+, and the median sale price for a SFH was $1.62m, which was a 13% YTY increase. The only section of the market which does see regular cool-off periods is the luxury market (which are properties above $2.5m+). This segment of the market is *extremely* seasonal, and is generally is hit the hardest in December and Mid-Summer. But most properties under the $2.5m pricepoint (which is considered a "starter home") are still quite competitive - particularly single-family homes versus condos (which are marginally more plentiful).

Inventory is still at an all-time low, and we've basically accepted that as the new normal for the past few years - especially due to the fact that there is practically no development in the SFH arena - only for new apartments/condos - and those can barely keep up with the demand.

Just to put things into perspective, in July there were approximately 197 homes on the market, which translated to 0.91 month's supply of inventory. For condos, there were 379 on the market, which translated to a 1.43 months supply. Just take a look at the % over list price that properties actually sold at: the extremely limited inventory, combined with the strong demand shows no signs of slowing down. 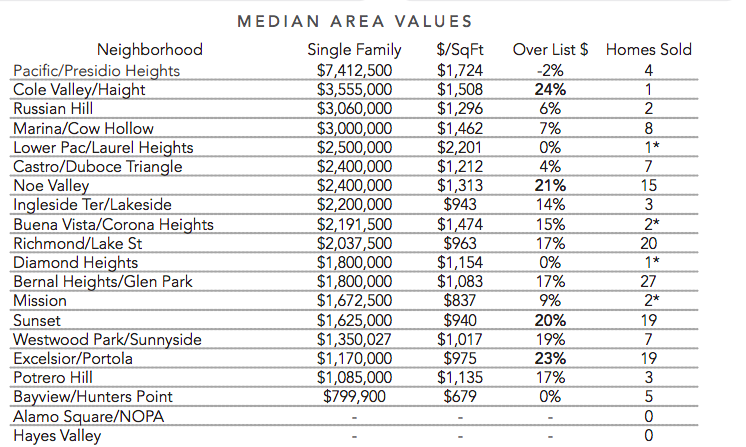 In the south SF bay area (Santa Clara County) we have seen a lot of properties hit the market over the last two months, and the injection of inventory has raised the average DOM. But, since we've had incredibly low inventory recently, and the number of homes on the market now is still lower than it was in 2012-2014 in this same time frame, AND the fact that jobs are still being created here (Google and Apple building new campuses for example), I think a slow-down is still a ways off.

I've seen what @Galen Crofut mentions, that there is more inventory on the Peninsula and some homes are sitting on the market for a bit longer.  I've even seen some stay on the market for 30 or so days before going into contract (I think something was up with that house). I also see homes going closer to list price but the list price is market priced. Last year a lot of homes were listed under market and then went $200K+ over asking. To me, this is just a marketing strategy to get people in the open house.

The overall trend is still up. I see you are in Tracy and I'd be interested in how similar areas perform.  In the last slowdown, places like Antioch and Brentwood were hit super hard and it was just a softening on the Peninsula.  Are things slowing where you are? That might be an early indicator of the rest of the market.

I live in Brentwood and have received email alerts on several home reducing their initial listing price. Could be a number of different factors, but I have'nt seen price drops in this area for years, so I've taken notice.