Which of these works best when contacting motivated sellers of vacant homes or home owners in a crisis situation? Call, text, email, or direct mail? That is if a skip trace has been used to find their FULL contact information such as phone number and email.

I will give all 3 a try as every market is different. If you have all 3 contact information then continue to reach out until one is successful. Prep your phone call before you give a call. Best of Luck.

I agree with Jonathan, get them warm with an overview email, shoot them a text and setup a meeting by phone. Then close the deal

Top Subjects:
Tenants, Finding & Screening Tenants, and Analyze Deals
@Tony Marcelle call them. This is a people business. Talk with them, ask to meet face to face. Email and text so impersonal. If cannot reach them, call different hours of the day, or call on a Saturday.
Log in or sign up to reply

You won't know till you try contacting them which one works. They might not even be motivated yet either. Leave a bright colored card on front door of vacant house, mail vacant house, alternate address if you find one, and you might have to repeat this for some time before they respond. Of course calling is fastest way to get in contact, know what your going to say and be cordial. If no results keep following up to try making contact.

Don't get to caught on this house and keep looking for others. It could take months or a year before you get an answer.

I agree with Jack. Call them. If the dont respond, shoot out a text or email and call them again.

Which of these works best when contacting motivated sellers of vacant homes or home owners in a crisis situation? Call, text, email, or direct mail? That is if a skip trace has been used to find their FULL contact information such as phone number and email.

Good to meet you Tony

Tan require a real person and the light purple are all automated. 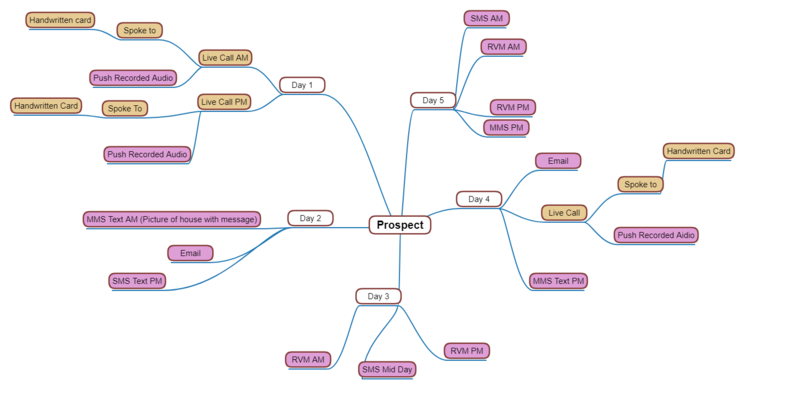 This is a series of Live Calls, MMS Text, SMS Text, Ringless Voicemails, and Emails. When you speak to the prospect write them a note and put it in the mail.

@Scott W. @Jack Bobeck  What to say to the seller when I call them? I am not great at cold calling, but I try to do my best. What do I say to motivated sellers who are in a crisis situation like bankruptcy, liens, auctions, etc? I may be tempted to tell the sellers I contacting them because of their bad situations, which I heard is not a good idea.

@Michael Quarles Hi Michael. Where did you get that? Could you clarify what I am looking at exactly and how to connect the pieces in the correct order? I have never seen anything like that.

@Bryan K. Do you know where I can get phone scripts when calling these sellers? I agree calling is way quicker. People are slow  to respond to emails and texts and direct mail. My other fear is catching them at a bad time when they do not feel like talking about selling the house. I do not do well with mean sellers who do not want to be bothered.

@Andrew LeBaron My biggest fear is calling someone at a bad time who does not want to talk about selling their house. I get nervous when sellers get angry and defensive when they are being contacted out of the blue. If you know where I can get a phone script that has been proven to work, that would be great.

@Andrew LeBaron I have tried it a few times before. I was nervous too because I did not know what type of attitude I was going to get when the seller pick up the phone. I sometimes ask them if this is a good time to talk just in case they are not in the mood as you mentioned. I found some call scripts. When would you say is the best time of day to call the seller?

@Tony Marcelle I stopped cold calling a long time ago because I found that I either caught the seller when it was a bad time, or I got their voicemail. I tallied the time I wasted in cold calling, and I spent over half of my calls leaving voicemails. The other half were either not able to speak at the moment or very unmotivated. Cold calling is like searching for a needle in a haystack. Honestly, technology has progressed to the point where we really don't need to do this anymore. Too many investors have a shotgun approach when in actuality, we can leverage technology to use our time more wisely and scale cost-effectively.

What I do now is send targeted text messages to sellers to see if they want to sell their house. It looks very much like a real person that is texting them. I found that credibility and first impressions are very important. When you cold call, the first impression that the seller has from you is that this person is interrupting my day and I want to get off the phone as soon as possible. Just think, you're calling them randomly and asking them about selling the most expensive asset they own. I always drop my website in the initial text, and then I send the people that don't reply a series of texts that build off of the previous ones. It doesn't look or sound unprofessional. When I cold-called, I usually found most sellers responded around lunch time, so I send off my seller engagement sequences off around 11 AM.

I used to be terrified of talking on the phone. Like, it's crazy because I was in the Army and deployed to Afghanistan...but when it came to cold calling sellers, I got very anxious and it made me nervous. It got easier over time, but it never sat well with me with not knowing how the seller would respond. Since I've started sending these targeted text sequences, I've found that, in fact, it typically isn't the best time to chat on the phone whenever I text them. Even the motivated sellers that wanted to sell would tell me to call back at a later time. I'll show you an exchange I had with a seller the other day. (It's in reverse chronological order) 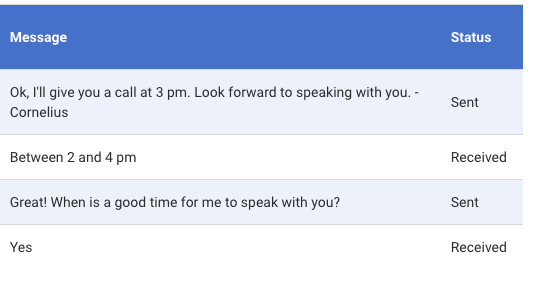 They wanted to sell, but if I called them randomly then that could have turned them away from doing business with me. Imagine if a Filipino cold called them; they would butcher it and I could have missed out on this deal. Oftentimes, we just jump in the conversation without asking the seller if it's a good time to talk. This is something that I've tried to train VAs previously, but they just didn't get it.

The key takeaway here is that you always want to be a "welcomed guest", not an "unwelcomed pest". Following this formula will take a lot of the stress out of marketing. I actually was able to get rid of a few virtual assistants and other unneeded members on my team because this is much more manageable. I'm able to do the same amount of deals as previously and cut down on the stress and headaches that I was dealing with previously. Hope this helps!