This is what the news is saying, but then, when did I ever trust the news. 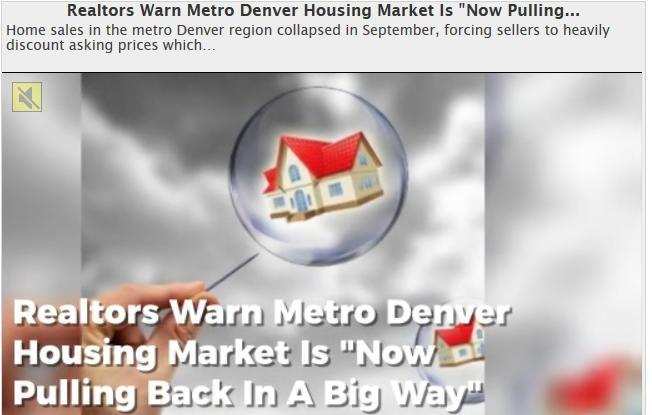 Yup, market crash of 40% is imminent. The good news is, Ill buy your properties at a 20% discount rate right now. Guaranteed downside protection.

Lol. If I had properties in Denver or Colorado, we'd be talkin'. ;-) I dunno, there is an article of the same for Seattle and for California are they slowing or is that hype too?

We are hitting our busy season, (yes, today is 80 degrees and slightly overcast) but boy do we have an influx when the cold hits the mid-west every year..

We went back to Denver to visit friends this summer after moving from there in '02.

We didn't even recognize our own route to get to our old neighborhood.  2 lane roads are now 4, traffic tons worse, new multi colored apt buildings all up and down the rail line.  Congestion everywhere.

Anyway, I think we got out just in time but I'm not big on city living.   In our old Aurora cul-de-sac, 4 of our 5 neighbors still live there but 2 have plans to move soon.  2-hr commutes are a factor.

We get this question asked all the time. In reality, no one knows (and I certainly don't), but the data doesn't point to any looming crashes.

Here's a great snapshot comparing the market today to the last bubble:

Account Closed pointed out, if anyone wants to unload property, I'll be glad to help out.

It's hype for now. Our inventory is finally getting up, but still a ways off from what's considered normal. 2019 Spring will really point to where it's going.

Predictor of a crash? Maybe inventory levels and days on market. Neither are near where they were just prior to the last crash. As Chris Lopez so artfully pointed out, the lack of inventory drives price increases (what one would expect) but the inbound net migration continues to grow.  During the 2008 crash, the weak lending standards created the mess (For those interested, I have a one-page history of the causal legislative changes that began with Jimmy Carter and goes through Bill Clinton and George Bush).

Inventory for first time buyers is very low. Builders can't build the houses fast enough. The land is expensive. Lots and houses are getting smaller.

Developments near the Denver International Airport are moving forward at a rapid pace. Aurora Highlands, Painted Prairie are expected to add 30,000 new homes to the market over the next several years, but not fast enough.

Companies arriving in Denver from gateway cities like New York, San Francisco, Dallas, and Los Angeles are moving to Colorado because (among other reasons) their employees cannot afford homes in their prior locations. In addition, the REITS, real estate venture capital funds and the sovereign wealth funds are not generating their required returns in those cities so they are moving to places like Denver, Austin, Nashville, and Portland.

There is a lot of commotion and disruption. But if your properties are cash flowing properly, you have good tenants, and you are a good landlord, then head down and plow ahead.

My crystal ball is cloudy, but my conservative investor groups are still hungry for commercial opportunities in this market.

Watch what is going on in Aurora, where most of the undeveloped land is located. Could there be a massive influx of investment capital on the horizon? Perhaps bringing an entirely new Aurora Central Business District with mixed use development?

Who knows? But I am keeping my eyes open to the possibilities and we are still investing.

Charles Roberts, the President of Your Castle Real Estate in Denver, recently sent out a message about the "Denver bubble" and a chart that explains it.

Here is his text, followed by the chart:

To put the inventory of homes for sale in better perspective, take a look at this chart. The yellow line shows the number of properties on the market every month going back to January 2007. The blue line shows the number of sales every month. What you saw during the downturn between 2008 and 2010 was an astronomical number of properties for sale (over 26,000 at its height!) which caused a huge buyer’s market and a crash in prices. Starting around 2010 and picking up in 2011 the inventory began falling and the market became balanced. Since 2012 there has been a dearth of properties on the market resulting in our super strong seller’s market. This is exactly how markets are supposed to work, ebbing and flowing over time.

IMO, Denver is in a bubble.  Housing prices vs income is way off balanced...believe it's the highest in the nation (~45%).  In comparison, San Francisco is in the mid to high 20's%.  Anything over 30% is dangerous. The jobs need to pay the salaries needed to keep demand going.

Using rents vs income as a proxy for sales price vs income, it is clear that the average apartment rent relative to average Denver per capita income is currently at 23%. The 35 year average is 24%. Rents are more expensive relative to income than they were in 2005-2013, when at historically very low levels. They are now slightly above the historical norm.

@Paul Choi Where did you get that data from?

I've seen the same data that @Rodolfo Canon pointed out. Below are two good graphs.

Based on national data, people are working longer in SF and other CA cities than in Denver to pay rent. 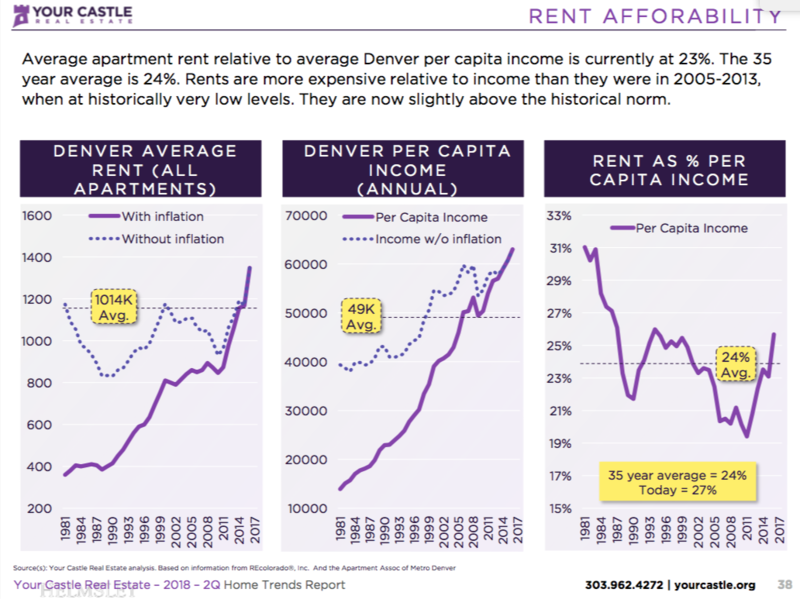 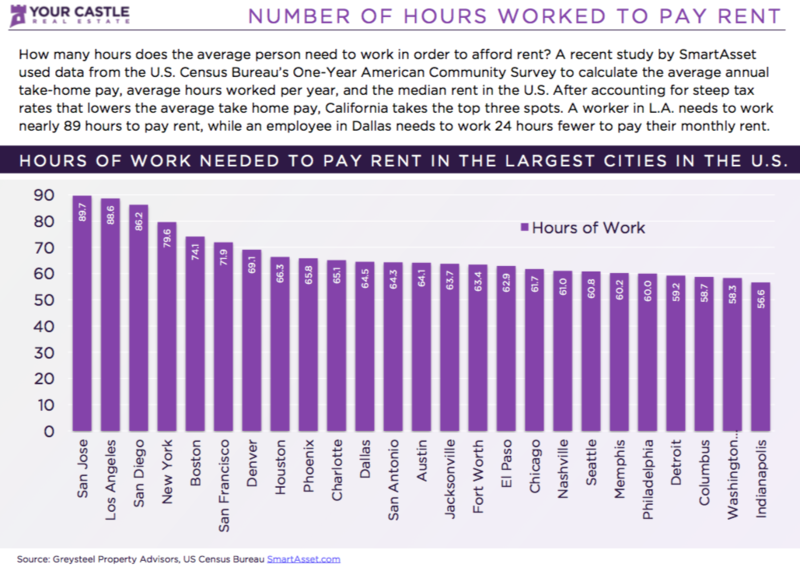 
@Paul Choi Where did you get that data from?

I've seen the same data that @Rodolfo Canon pointed out. Below are two good graphs.

Based on national data, people are working longer in SF and other CA cities than in Denver to pay rent.

I was referring more to price of houses vs income, which translate into demand for residential purchases.  MF rental market is different from this metric for sure if your in that investment vehicle but the original poster was referring to housing prices I believe. 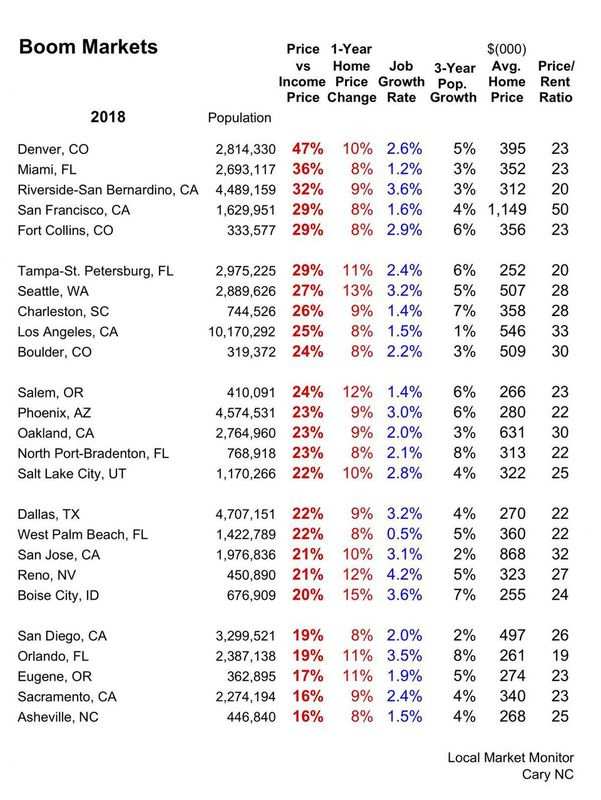 Account Closed just read an article from a reputable publication (see link) that says that more people are leaving Denver than are moving in (last two quarters). While other communities have median prices in the 200s, Denver Metro is still 400+.

No. He mentioned 20% of income to rent ratio as being dispositive for all markets. In Denver, the norm for the last 35-years has been 24%, and this is the "average."

Averages can be dangerous. One can drown in a lake that averages 6" in depth.

Granted, the prices in Denver have been on a steady increase. However, if one removes inflation, the current price increases (over the last 12-months), exactly match the historical average of the last 45-years: 6%.

The best predictor, in our opinion, of a shift in the market is inventory levels, followed closely by Days-on-Market (DOM). Inventories are up slightly for a couple of months (up to 1.6 months). A balanced market is 6-months of inventory. We are a long ways from that point. DOM are increasing slightly, but that MAY be because of over-exuberant sellers over-pricing their properties.

The Forbes article cited by Paul Choi does not give us an operational definition of a "boom market," nor one of the "income price," although it might be assumed that it is the income average of the market divided by the average home price. But what is the distribution of those income levels and the prices for the homes? Is it  normal distribution? Are they homogenous? For example, is the market segment between $500,000 and $750,000 the same as the market segment between $250,000 and $500,000? Are detached single family homes the same as condos?

I don't have the answers to those questions, but neither does the article.