Hi BP members, I wanted to ask all of you if anyone can help me analyze this off market deal from my realtor.  Its is a legal 6 unit building in Jackson Park.  it consist of (5) 3/1.5 and (1) 2/1. Owner said it has updated electric and copper plumbing newer forced air furnaces and c/a conditioners and some more updates. 2 of the 6 units are vacant and 3 units are being rented at $900.00/month with one unit being used to house the property manager. I am new with analyzing multifamily, According to my realtor the 2 units need some rehab or updating. Tenant pays their own heat and Electric.

Unfortunately I don't know how much the water bill and gas bill are and don't know what the extent of the rehab for the remaining 2 units.

Any advice, comment or replies to this thread will be greatly appreciated. Thank you in advance for your assistance

@Oliver Santiago It's extremely hard to evaluate the property without knowing more of the expenses. Eliminating heat as an expense should make this a good cash flowing building. You need to inspect the two units that are in need of rehab and check their condition. There seems to be a conflict between the supposed great condition of the building and the low rents and vacancies. If they are giving free rent to a property manager, it shouldn't have two vacancies.

The market is hot right now so I would try to schedule an appointment asap to go see it.

@Bob Floss II  Thanks. I will try to get as much info as I can when I tour this property.

This is what I come up with base on the following assumptions:

This is a template I use myself, it's not proven useful/accurate. also considering all the assumptions ... 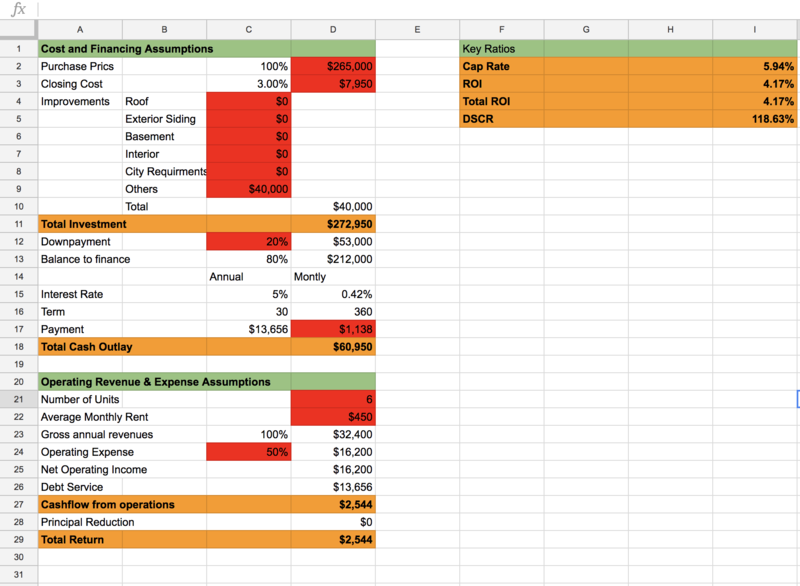 Hi Oliver, from the surface it looks like it is worth a deeper look.

Where around Jackson Park is it? Neighborhoods change quickly down there, so be aware of where you are buying. However, that area is poised for growth. Lots of people expect the Obama Library and other developments to push value in this area of town.

About the deal, based on my analysis I see 6-units having about $3500 in water expenses annually. There is a wide range, but this is probably a safe assumption. I'm also assuming $2000 for insurance, $300 each for electricity and gas/heat, and $1200 for scavenger (swag). Not sure on Vac/CAPEX/Repairs without knowing the neighborhood or building condition, but plug in something between 5-10%. Even with these numbers and current rents you're running around 60% expense-to-income which is in the ballpark of what you'd expect.

Rents seem to be a bit low, as well. Just a quick internet search showed 2 BRs going for about $850+ and 3 BRs going for $1000+. Again, depends on your neighborhood. I'm conservative and use low numbers.  Might talk to local property managers to see what they say.

I personally wouldn't use a live-in property manager for a multi this small, just doesn't make financial sense compared to paying 8-10% for an outside manager.

You said tenants pay for heat, but you're asking about the gas bill. If tenants are paying, I'd think you would only be out a few hundred bucks each year (per above), at worst.

Assuming rents as-is ($900 for 3BRs, maybe $700 for the 2BR), your gross monthly rents (at 100% occupancy) are still 2% of the purchase price. At market, it's even better. Not sure if this is a great opportunity, of if something else is going on that's not readily apparent. I'd be interested to hear about reasons for the vacancies.  Dig into the area demographics and how it's trending, and also look into the needed repairs.  Once stabilized, if this property is in a decent location it could be very profitable.

There's investors on here that specialize on the south side, and I'd be interested to hear their thoughts. Seems like this one is a possibility.

@Calvin Liang I like the simplicity of your spreadsheet.  Down and dirty.

For commercial loans I'm seeing around 5.5% with 15-20 year ammort and a 5-7 year balloon.  Seems yours is set up for residential.  Let me know if you have comm lenders giving your terms, I need an introduction! :)

@Robert Meyer  lol that's also a lazy assumption. using your number cashflow will go negative. But it doesn't really matter cuz we are using a lot of assumption here :P

Lending on a six unit building will be more like what @Robert Meyer  posted than what @Calvin Liang  has in that spreadsheet, so yes the cash flow will not be as good.

Having one unit occupied by an onsite manager is giving 1/6 of the scheduled rent to PM, or like 16% - surely you can find an outside PM to manage for less.

thanks for all the input@Robert Meyer ,@Steve Babiak ,@Calvin Liang . I’m going to visit the site today to see how much work is needed to be done. And maybe ask for the most current rent roll and expenses.

Where in Jackson Park? As @Robert Meyer said it makes a big difference. Here are some things for you to consider.

-"market rents" are lower than CHA/HUD (section 8) rents, is the building approved for section 8? For example, a 2BR might get $800-$900 from a market tenant and you have to collect the full amount. A nice 2 BR unit (see below) can get up to $1250 from a section 8 tenant and is guaranteed money from the government.

-To maximize rents I would recommend that you consider unit upgrades (depending on what condition current units are in). Size of unit (small or large 3 BR), condition of unit and upgrades in unit will make a big difference in what CHA approves the units for AND tenant demand for your unit, they can easily take their voucher elsewhere

-$4500-$5000 per unit is a good "plug" number for expenses in this area. This number includes capex replacement reserves. It does not include upfront operating reserves/renovations.

-You want to make sure that you have a good PM that specializes in this area. Message me if you want some recommendations.

@Scott Skinger thanks for the info. The subject property is located just 3 blocks from stoney island and near the Jackson Park golf course. It looked like a decent area.

I looked at the property this morning. It looked like the owner is just tired of managing it himself and could not keep up with the maintenance. The building was built on 1920. It was on the market and was listed for $539.00 back in 2009. He showed me that each unit has a separate furnace and Central AC and separate electric meter. He has several code violations including one in both of the garden units has a glass block windows instead of a regular windows. I don't know if it would pass section 8 but a little touch of rehab will do. I'm guesstimating to at least put another 12-18k per unit to upgrade the remaining units for it to pass section 8. The building has not passed inspection since 2016. It has 3 units with 3/1.5 and 3 units with 2/1.5.  Three units are rented and collecting $2900.00/month the other three is vacant and is currently being rehabbed by the owner. The person who the owner hired as the manager is staying in one of the garden apartment and the other garden apartment is rented for $600/month.

Generally speaking that area is good but it can be block by block.

Right now you are at $44K+ per unit which is pretty good for this area, especially because you have 5 - 3BRs. A great building with nicely renovated units might be around $65K-$75K/unit, $400K-450K. Some things you need to consider and get a handle on:

A. How much will it cost to bring the building up to code? what are the violations? how much is owed? will a condition to close be that the current owner satisfy all building violations? I would want to have a good handle on this information before getting to far along in this process. What if there is $50K of work that adds no value to the tenant (i.e. higher rent)? The deal still may be worth it but that is $50K more that you need to come up.

B. 3 BRs can get up to $1500 from CHA if they meet their standards. If I were investing in this property I would want to know if the units were large enough and what improvements need to be made to meet CHA standards. With the help of a PM, I would scope out "$x of work needs to be done to unit 1 and then it is capable of achieving $x rent". Do this for each unit. It is fundamental to your underwriting to figure out how much cash you need to put in and what the gross income potential is. I mentioned this before but market rent to non-CHA tenants might be $1000 with more problems, compared to $1500 with less problems. There's a big difference between $72K of gross income and $108K of gross income annually.

C. Basic repairs = No man's land. In this area, many times basic repairs will not earn you approval or the highest rent determinations from CHA. So you fix a place up to a reasonable level (say $2500 reno), but you don't attract the best tenant at the highest rate. Your mediocre tenant turns a year later, destroys the place and you have to put another $2500 in. If you really reno the units and put $5K to $10K in, you get CHA approval, the highest rent determinations and the best tenants. These tenants tend to stay longer and respect your place. It may seem "off" to put in class B finishes in a class C neighborhood but this is what is working. Again, I highly recommend that you talk to a PM that specializes in the area and discuss your specific building.

Great advice @Scott Skinger . Can I have your permission to PM you for a more detailed view?

Of course, actually, just send me an email at the email address in my signature below, easier. I won't be around again until late afternoon but I will try to get you a reply to your question(s).