I have three 30 year mortgages:

I can start paying down principal but should I pay off my home or investment property 2 first? The interest rate on number 2 is higher, but it's also tax deductible. Advice?

Let your tenants pay them down.

If you have money you do not want to invest in additional properties you could pay down your home mortgage and then set up a HELOC to access the cash.

There is no reason to pay down a income property mortgage. Al that will do is save you at most 5.25%. If you do not want to invest in more properties put the money in a REIT, income fund or something similar and you should easily achieve 10% returns.

Paying down a income property mortgage amounts to hoarding of worthless cash.

@Eric D. Always pay down your primary residence if you are paying down a property vs using t for investing purposes.


I have three 30 year mortgages:

I can start paying down principal but should I pay off my home or investment property 2 first? The interest rate on number 2 is higher, but it’s also tax deductible. Advice?

Investment Prop 2 has the lowest balance and the highest rate. Usually it's a debate between the lowest rate and lowest payment. In this case, one property wins both.

Once IP2 has a P&I payment of $0.00, use that additional cashflow to nuke the remaining two. At that point it'll be time to revisit the balance v rate debate.

The standard deduction amounts will increase to $12,000 for individuals, $18,000 for heads of household, and $24,000 for married couples filing jointly and surviving spouses

Ideally if taking standard deduction you will be debt free sooner.

@Eric D. , if both your investment properties cash flow positively, what's the hurry? (And if they don't, why did you buy them?) I can see both of the Chris's points of view, and Sam has added another layer of complexity as to which side might be "mathematically right". At this time, I tend to fall on the side of paying down your non-income-producing primary. My guess is: that's the one that will get the highest HELOC approved once it's closer to being paid off, right?

[And, I take it that you're not done with investing, any time soon?]

Anyway, great that you have plenty of dollars to play with. Kudos on your progress to date...

@Eric D. I’m not gonna debate you on whether or not you should pay them off, like everyone else is. That’s really a personal choice more than anything.

To answer your question I think 309k at 5.25 percent. Highest rate and lowest balance make t the easy choice to me

Would you invest in more property instead? Thing is, I live in North Jersey where good deals are hard to come by

Not sure if that’s directed at me or not but that’s why I invest out of state.

@Eric D. I hope you don't mind, but I made some significant assumptions about your situation and put it into my real estate portfolio analysis software to see what it looks like with you for 3 scenarios:

1. Don't pay off any mortgages

In all cases above, I made a bunch of assumptions:

Based on my calculator and my assumptions, if you don't pay off the mortgages, over 40 years your net worth from these 3 properties and the cash in your bank would be about $7.58 million.

One could argue that you should take the $1,000 per month that we're applying toward mortgages and invest it in something else (maybe the stock market) to do a more fair comparison for the for the "Do Not Pay Off Mortgages" scenario. If your stock market number exceeds the interest rate numbers that will probably do the best.

Probably the most interesting chart is the True Cash Flow(TM) chart for the three scenarios. I've shown that below. 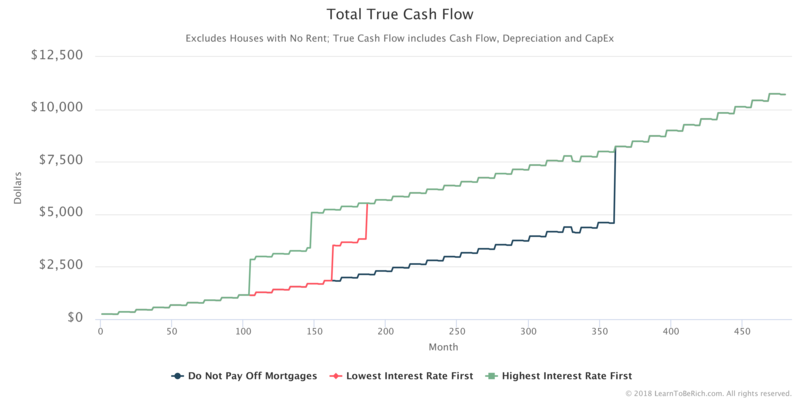 In the case where you do not pay off mortgages faster than normal, I assumed ALL three of your properties started their mortgages this month so they all paid off in the same month. I suspect this is NOT the case.

Here is a chart showing your "bank account" balance for the three scenarios. In the ones you're paying off the mortgages the balances hover at zero until you've paid off all three houses because I assume you take all your extra cash and pay off loans. With the other scenario, you're putting aside the $1,000 extra from your income and any additional cash flow from the rentals as cash flows improve over time. 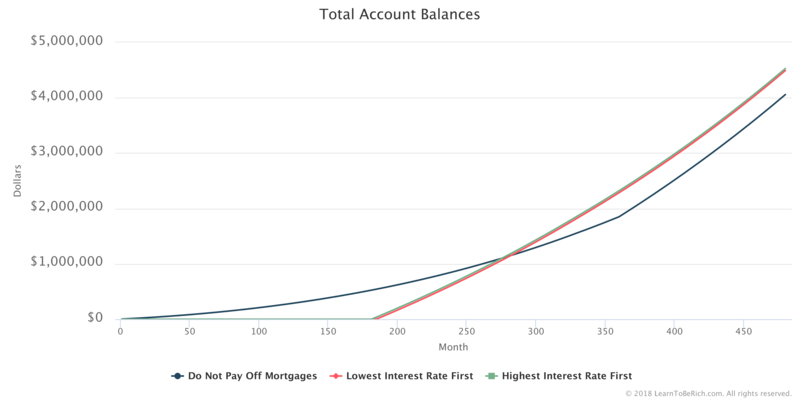 I did not model the impact of tax deductions from the mortgage expenses.

Does that help at all?