Will the cap removal also remove the possibility of doing a split loan (using part of the benefit on one and another part on another)?

Will there still be a one-time second use option for vacation homes?

Could veterans literally just buy a million dollar fourplex (They exist in my market) and make the government support the risk?

I'd love to hear other questions people have, and especially answers from lenders

@Jacob Pereira what "Loan Cap" are you referring to exactly? VA Loans do not have a "cap". Once you go over the jumbo loan amount a Veteran can still recieve a loan from the VA. Admittedly, they would need a down payment after jumbo....but it's SUPER low and still one of the best loans you can find at that level.

Likewise, VA loans are not permitted on Vacation Homes. VA loans are ONLY for primary homes. Well, let me rephrase slightly....you can keep your current VA loan ON a home that you are vacating...but you cannot use a VA loan to PURCHASE a second home nor an investment property.

The "second use" option is just when you use VA loans more than once you pay a higher funding fee. If you are 100% disabled, you don't have a fee at all. You can use VA loans over and over. You can also have 2 VA loans at once under certain circumstances.

And yes, a Veteran can certainly purchase a million dollar fourplex with a VA loan. No PMI on it too. So it's really a great loan.

Hi @andrew postell, thank you for the response. The loan cap to which I was referring was the previous limit of $484,350 that was the limit for a VA loan up until this Tuesday, when President Trump signed the new "no cap" law into effect.

It appears I was incorrect in my understanding that there was a one-time use option for vacation homes, but the question still stands: now that there is no cap, can I use the loan over and over to borrow massive amounts of money on fourplexes, provided I live in them for a year each time?

Will the cap removal also remove the possibility of doing a split loan (using part of the benefit on one and another part on another)?

Will there still be a one-time second use option for vacation homes?

Could veterans literally just buy a million dollar fourplex (They exist in my market) and make the government support the risk?

I'd love to hear other questions people have, and especially answers from lenders

Lawmakers write a law, the legislature votes on it, and if yes the executive signs it into law. Those steps are all done.

What hasn't been done yet, as far as I know, is the bureaucracy implementation of the law. The promulgation of how it will be interpreted and whatnot (subject, at a later date, to a court of law ruling on that interpretation, should it be challenged). Until that initial promulgation from the Department of Veterans Affairs comes out, no one is doing a VA loan that would only work according to their own particular interpretation of the new law. What matters is the VA interpretation.

So, with that being said, here's what I'm hearing from the water cooler rumor mill (including rumor mills that are loan originator only online groups of various sorts).

- First use, no limit, no down payment required. Everyone pretty much agrees on that.

- Subsequent use, rumor mill all over the place. I think some people are being too optimistic in thinking you can just buy a $1.5m home per year without ever making a down payment, that would be a LOT of exposure captured by a small minority of Veterans. If you have most veteran homebuyers exposing the VA to $300k or $700k of exposure, but then 1% of them generating $4m of exposure, that's a few veterans gobbling up a lot of VA liability. This seems implausible, this minority would burden the system for things they "want" but don't "need," think of if I am perfectly healthy but walk into a VA hospital on a weekly basis for some optional cosmetic procedure that isn't medically necessary, this burdens the system and isn't fair to other veterans that may have genuine needs that aren't being met because of me, so generally it's safe to assume the VA will try to minimize this activity. I think the same "common sense" approach (to the extent that a big federal system like the Dept of VA is/can ever be "common sense" or "logical") will apply here, what exactly that looks like remains to be seen.

- Million dollar fourplex? Most of the rumor mill believes this will be allowed, this thread of mine from a few years back will need to be substantially re-written.

Keep in mind that all VA loans, except for those made to disabled veterans, come with a VA funding fee. The funding fees are a % of the loan amount, the whole point of this new law isn't to put veterans into bigger homes, the objective of the law was to raise money for VA healthcare. Allowing for larger loan amounts with 0% down will accomplish that, since that VA funding fee is a percentage of the loan amount.

Banks have started populating 2020 VA Funding Fees, so I think the following paragraph ought be accurate. 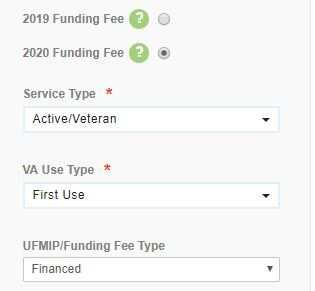 One further thing that we do know is that the VA Funding fee % is also changing (unless you have a service connected disability). 2.15% is the most common currently, that's going to be 2.3%. Subsequent use is currently 3.3%, being bumped to 3.6%. So this isn't ALL good news for ALL veterans, the veteran just buying a starter home to live in will be paying more in fees (or rolled into their loan balance, meaning they will be more in debt). For some contrast, FHA loans have a funding fee too, and it's typically 1.75%. 5% down currently gets you a reduced funding fee of 1.5%, first or subsequent use, that's getting bumped to 1.65%. 5% towards equity (money you get back when you sell) to reduce the amount paid in fees (money you never get back) made sense if you could swing it before, and it still makes sense. There's another reduction if you go to 10% down, but honestly I've never met a veteran that wanted to do it.

I'd go out of business if I charged 3.6% in lender fees (note that I didn't say 3rd party, that 2.3% or 3.6% is JUST the VA loan fee) on my non-VA loans as a routine matter of course, so while they are still great (I'm in a VA loan, how bad could they be if people IN the mortgage industry use them? Every military veteran loan originator I know has at least 1 VA loan), they aren't free by any means.