I am in a quandary with a perspective tenant.  For last month or so I have been showing the house to lots of people and have had a few applicants that just did not work out for whatever.  Been working on house for a year so need to get someone in it to turn the tide of money going out. Tonight had great perspective tenants show up. They plan on being in house at least 2 years, have great credit, good income, appear references will not be a problem, and all around good people.  When they asked if I allow pets I said yes as long not under the listings my agent has for vicious breeds.  Sure enough one dog is a German Shepard, which is the 3rd or 4th dog deemed by my agent as not being allowed at property.

My problem is what to do.  Supposedly dog never done anything wrong towards anyone and have no reason to think it has.  I myself have had shepherds and rot's with never had any issue either.  Now stuck, have great perspective tenants with a dog insurance agent will not want.  Do I take them in and have sign something stating if anything negative ever happens they are responsible for any and all damages and myself, wife, and company have no responsibilities for the dogs behaviors?  Do I say sorry dog is not allowed in house due to insurance company rules?  Not sure what to do here.

If it was a service dog my understanding I would have to take it in anyway but then what would I do about insurance company.  Seems like stuck in a bad place on this one.  As I get closer to end of this month feel I may be sitting on house all winter. Already had to drop rent by $200 because all remaining house around me began dropping prices fast to try to get someone into them before winter.  Hate to carry this thing for another 3 or 4 months.

I am a little unclear as to what you are saying.  Do you mean your insurance agent has said you can't allow certain dog breeds?  I believe this is discrimination just like against a person?  Unless the dog has actually attacked a person and been deemed vicious, but it sounds like there is no history of that.  I could be wrong but I have been in insurance for a long time and have never heard of an entire breed being banned.  Specific animals once they have been deemed vicious, yes but not an entire breed.  I would double check with your agent.

I have a separate Pet Agreement Addendum for my lease.  In it the tenant acknowledges that the animal has never before attacked another animal or person.  Has never been deemed vicious.  It states they agree to insure the animal is kept up to date on all shots, etc.   All liability for the animals actions are laid at the feet of the tenant and off of me (to the best of my ability) within the document.

I currently have a tenant with a German Sheppard and have never had a problem.  I have had Rottweilers and they were the best dogs I ever had.

"His pet deposit is your deductible."

Use Mr. Badin's idea of the separate Pet Agreement Addendum to your lease.

Option to is to get a few insurance quotes.

My insurance was going to be cancelled because of a “dangerous” breed.

A "vicious breed" is whatever breed it is that idiots with mean hearts currently think makes them a "real man," going back in time 10 years or so.

Meaning that if in 2007 idiots with mean hearts thought that owning a Chihuahua made them a "real man," we would today (10 years later) be seeing in the news that Chihuahuas were jumping into baby strollers and biting baby faces off, because mean hearted idiot personality types disproportionately got them, and made them into mean dogs, for the immediately previous decade.

It has been far longer than 10 years since mean hearted idiots (who were thinking back to WW2, so ~1950s to 1960s) thought that owning a German Shepherd made them more manly, ergo German Shepherds no longer need to be on that list.

Granted I am 100% biased. Here is my young "vicious" beast lady, being socially awkward on the couch (anyone who likes "Doctor Who" is generally socially awkward...), adopted shortly before she otherwise would have been executed for the crimes of human idiots with mean hearts: 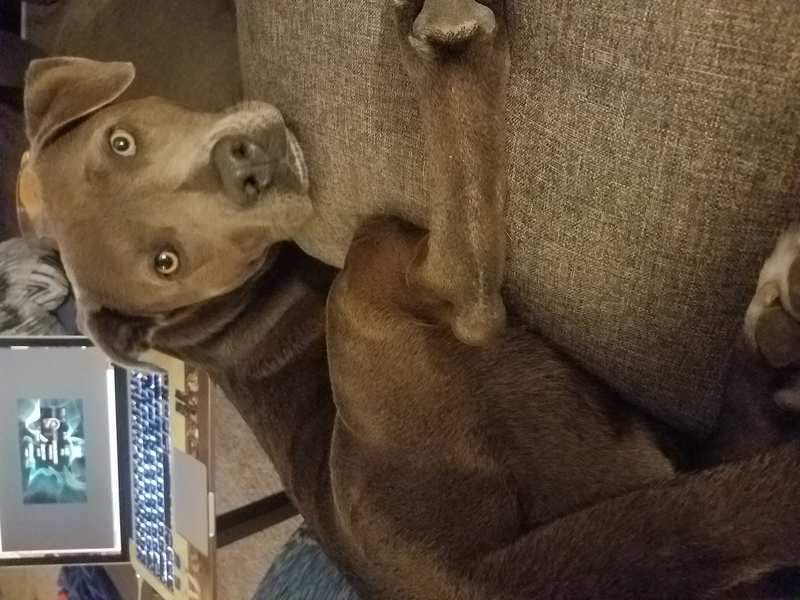 thanks for the input.  I believe the who dangerous breed is stupid too but trying to keep insurance company happy and getting good people.  May very well do the separate addendum for pets.  My lawyers lease has a clause in it about no dangerous breed dogs too when I was reading through it last night so may have to have addendum that undoes that part of things.  Lawyer was extremely thorough with the lease for sure.

If you want to accept this tenant I would switch insurance companies. You could also require the tenant to have renters insurance which covers the dog. There are policies that do accept the tenant’s dog.

If your insurance is going to get canceled then might not be worth it but if your insurance will allow it then it's your call. I know some companies will cover all breeds as long as they haven't bitten. Just require them to get renters insurance with a liability policy that you feel is good enough that way if anything ever happens they have insurance to cover it. But you'd want to make sure they are keeping up with it.

Chris, try other insurance companies, especially ones  geared more toward landlords, like possibly Foremost or American Modern.  Some have different lists.  I think someone once said Farmers is pretty good, but it wasn't available in my area.  A German Shepherd, however, is  likely on many companies' lists.  Or, ask your insurance company if your tenant can  provide a hefty liability policy (minimum $500,000) with you as additional insured/additional interest (never know which one is best), and if that would satisfy them.   Unfortunately, if your insurance is at risk,it is better to avoid this tenant.    I do not allow restricted breeds for liability reasons, and I also require proof of age (no puppies), vet records showing breed and current rabies, proof of city license if required, and personal pet interview or K9 Good Citizen certificate.

Lynn  and others, first thanks for the input. Very helpful. I'll be reaching out to some at insurance companies either way so I'll speak with them related to dogs. My current insurance provider will be dropping us shortly because the house has been vacant for a year and their policy will only allow one year of coverage anyway.

I dont know if this helps or not but I had a GSD that was on my insurance dangerous breeds list. I called the insurance company and told them she is the sweetest dog ever. They asked for some pics of the dog. I know that sounds strange but I complied and they decided to insure me anyways with no extra cost. It sounds as if you decided to shop around. Just keep that in mind with future insurers as well.

keep advertising,, you'll find someone without a dog and with much less aggravation.. people say oh yes we'll stay for years all they want is someone to let them move in with their banned dog..

I believe you are being lied to regarding staying for 2 years as Deanna suggests. Do not consider that they will stay 2 years as a factor in considering accepting them.

If you allow dogs and are not concerned they may attack a child in your neighbourhood then the simple solution is to change insurance companies if you find one that will cover German Shepherds.

I also have had several German Shepard's growing up and as a adult and I would never trust them around strangers. They are extremely protective and can be very aggressive. They must be well trained to be properly managed. Definatly not a risk I would take in any of my units however I do not allow pets so not a issue for me.

Top Subject:
Maintenance
Aside from staying for 2 years which even the best tenants dont abide by (life happens) if you accept animals find another insurance company. This one is going to drop you anyway. Make sure they have liabilty on thier renters insurance. Keep showing too in case it doesnt work out.
Log in or sign up to reply
Related Resources General Landlording & Rental Properties
6 Tech Tools That Make a Landlord’s Life Easier
Turtle Soup in the Kitchen Sink — Or, Why You Shouldn’t Skip Yearly Rental Inspections
What Is Rent Control—And Is It Bad for Landlords? (Updated 2021)
How to Choose a Management Company for Multifamily Properties
Trouble Collecting Rent on Time? Try Flexible Rent Payments
Resources Read, see, and learn more!
Real Estate Investment Calculators
BiggerPockets Blog
Path to Purchase
Mortgage Loans
Find a Contractor
Real Estate Agents
Hard Money Lenders
Real Estate Listings

Mike Baxter
Somewhere in the Scorching Heat of AZ
1.72
Score