I've got a property that I am rehabbing and our timeline unfortunately got pushed back into the upcoming winter months.  The property is currently vacant and does not have an HVAC system installed. We have a number of things that need to get done before we can get our HVAC crew in there to install.  Until I wanted to make sure I took the measures to prevent our pipes from freezing/bursting.

I am not sure what the best preventative solution would be so I'm asking the smartest people I know, you all!

I've read online about insulating pipes to keep them from freezing however if the space is not being heated do I need to go out and buy a space heater to try and keep the space a bit warmer?

Either use space heaters or drain the pipes and shut the water main off. You can pour RV antifreeze in drains/traps/toilets.

We went through this in 2017. In Placer Valley, Alma, Colorado. Its not only the highest town in the USA it is also regonized as one of the only sub-artic micro climates in the lower 48 states. Double digit sub zero is the norm in winter months. We used electric space heaters and we had no issues. They worked well. I recommend staying away from the super cheap ones. Maybe get a variety. Modern electric space heaters have safety switches on them and will shut off if they tip over. Keep them away from combustibles and concentrate on where you have pipes,  bathroom, kitchen utility room etc. Electric heaters will FAIL so don't count on just one. Check them regularly. We were shooting for 50-55 degrees as a general rule.

Turn the water off at the street.

I like those electric radiator heaters there is no fan so there is no noise and they are cheaper to run. they cost $40-$50.

Shutting off the water will prevent flooding. But to keep the pipes from bursting, you need to either keep them warm or empty them. Most household plumbing will retain water and will need to be blown out to get the pipes empty. A lawn sprinkling maintenance person would have the experience and equipment to do this.

In my area most foreclosures have the utilities turned off so the plumbing need to be winterized by about October to prevent bursting. Depending on the expected temperatures in your area I'd look at doing the same thing until you have the HVAC situation handled.

Any vacant property in the winter should be winterized .

Since the house is vacant shut the water off at the meter. Full drain both hot and cold lines down to the lowest fixture. Make sure you fully flush all the toilets empty. I also need you to fully drain the hot water heat so that doesnt freeze and expand and destroy your water heater.

Lastly I want you to purchase a heat trace line from Home Depot or whatever is near you and wrap it around the **** off meter in the house and plug it in and you will be hood to go until you get the HVAC system up and running.

Whatever you do DO DONT run the HVAC system until you have all the dust task taking care of and you house is cleaned well. Number 1 killer of HVAC systems is sheetrock, wood floors and trim dust!

I just put my GC hat on for you. Good luck.

This is the full water winterizing procedure typically used in Western Pennsylvania. Several other contributors have described the same or a similar procedure:

1. Turn off the water heater

2. Turn off the water main

3. Go to the highest faucet or tap in the system first and open it.Let it drain and leave it open

4. From highest to lowest, open up all the faucets in the house. Let them drain and leave it open.

5. Drain the water heater from its lower (main) valve. Leave this valve open

6. Pour one cup of automotive antifreeze down every drain.

7. Pour four cups of automotive antifreeze into the internal tank of each toilet bowl. Flush.

If you have hot water heating, turn boiler off, open bleed valves on every radiator, drain the system from the compression tank.

I would recommend this if you're leaving a cold place be for the entire winter and plan to turn off the heating as well. This is what everyone does all the time in places like Canada, upper Oregon, Washington State, Idaho, Wyoming, the Dakotas, upper Minnesota, upper Wisconsin, upper Michigan, upstate New York, most of New England. This is what's usually done by local governments in abandoned housing.

In most other, more temperate climates, people don't always take such drastic measures because they can get away with doing less. In a place like St. Louis...it rarely gets cold enough to really need to go all the way, and there are additional, knock-on effects involved in turning off heat to a place for a long time that you can avoid if you just keep the thermostat at 55 degrees and, when the coldest weather is projected, you set up the lowest faucet in the place to the slowest steady run for the duration of the coldest temperatures. This will cost you some money on your water bill and heating, but not that much. It's up for you to decide what's best for you, based on your understanding of the local weather, how well the house is insulated, etc.

I've seen a lot of damage after someone/some company has supposedly winterized the home. Low lying laterals, old buried drum traps etc will freeze. I prefer to pump food grade RV antifreeze through the potable water lines. In fact for the last 6 years I've used this process for our 1900 sq ft 3 bathroom Lakehouse. It takes 1 hour & 9 gallons. It suffices to prevent the fridge water/ice lines, dishwasher, washing machine & on-demand hot water heater, from freezing. Our Lakehouse neighbors drain their hot water tanks & try to blow out the lines with compressed air. Over the years one has had several water line leaks & the other has gone through a couple of 30 gallon HW tanks. The minimal cost of RV anti-freeze is great insurance & will save you a lot of $$$.

I would also fill any P-traps you hope to keep as well as toilet tanks & bowls. I've seen a lot of them cracked. Running electric heat tracing rarely works effectively, (been there done that), & a power failure up here for a few hours can result in freezing. Another precaution we take is disconnecting & removing the water meter to prevent it from freezing. When those freeze/frost plates burst could be a new $300+ meter & a mess if you don't realize it has cracked burst. We have retrofitted a few badger frost plates over the years.

I have also pumped in RV antifreeze for a couple of old steam/hydronic systems, until we can get them up & running again. We had one in a foreclosure we bought, (winterized by the mutts hired by the bank), & we had to tear out ALL the old lines buried behind the lathe & plaster walls/ceilings.

The best way to do it is hire a plumber. They can shut off the water, drain the lines, and then put antifreeze in the system so nothing can freeze and burst.

If you do your research and pay attention, you can do this yourself. But if you screw up, it can be a fairly costly mistake. I prefer to hire a pro just to be sure.

Defiantly want to take the time and make sure you do it correctly.  Also be thinking about other systems in the house that may have plumbing besides the water supply.

For example, older houses in the Midwest have hydronic heating systems.  I purchased a bank owned property once and they did not get all the water out of the system before the freeze (lucky bought at a big discount).  Long story short, I ended up replacing a cracked boiler block, a radiator, and a couple of sections of cold water piping to the bathrooms even when the place was supposedly winterized.

@Ray Jhala 1st off you need to hire a new crew if they cannot even figure out what to do . SIMPLE winterize the house

1) Use RV antifreeze, NOT automaoble antifreeze. It's safer in case it gets into your potable water. FLush the toilets to remove as much water as possible, add antifreeze to tank and do a "partial flush" so it gets into the trap of the toilet. TAPE THE TOILET SEAT SHUT SO IDIOT CONTRACTOR DOESN'T USE IT!

2) Open all the spigots/faucets and leave them open. The #1 way plumbing lines get blown is by expanding water having nowhere to go, which results in air in the lines (not the water) being "squeezed" and blowing out the lines. Look it up!

3) You can usually just turn the water meter off and remove it (so it doesn't get ruined). Only with extreme cold do you need to turn the water off at the street.

4) Obviously drain your HWH and leave the valve open

5) We've never used compressed air to blow out water lines and it's never been an issue here in Michigan.

6) We have used compressed air to blow out boiler lines once. Usually we just leave them running, but this owner wanted their property "mothballed" for the winter.

I am a property management professional in the WI market. We handle full flips and renovations year round for our clients.  Best plan of attack is to follow many of the suggestions above from fellow members.  Pay the money to have it done right now by a plumber to avoid a costly disaster later.  If your contractors need to utilize water for any reason have them bring in external containers for use but only dump/drain outside. even after the plumbing has been drained and winterized its still a good method to have space heaters with temp limits (50-55) in the basement and facing the kitchen/ bath with all doors/cabinets open to avoid expansion/ contraction of the pipe material.  Good Luck!

"..If your contractors need to utilize water for any reason have them bring in external containers for use but only dump/drain outside..."

exactly...these guys had one girl on the job so rigged this up...she was NOT IMPRESSED plus the only bathroom at the time had studs for walls.

Note to moderators: This is NOT an advertisement for HD buckets 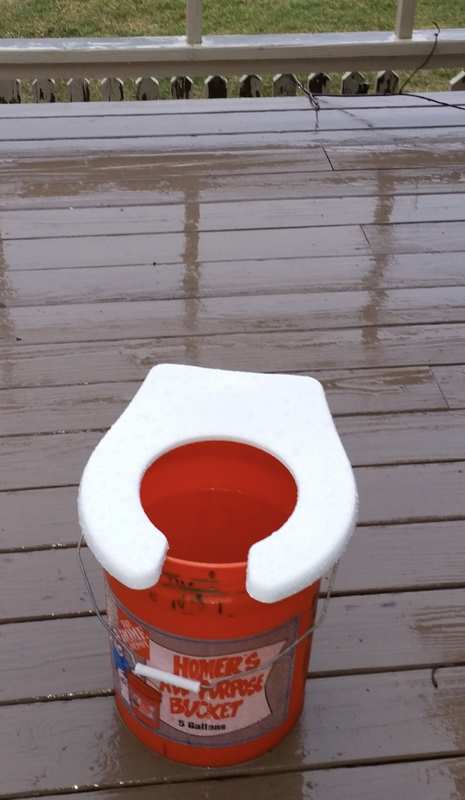 "..If your contractors need to utilize water for any reason have them bring in external containers for use but only dump/drain outside..."

exactly...these guys had one girl on the job so rigged this up...she was NOT IMPRESSED plus the only bathroom at the time had studs for walls.

Note to moderators: This is NOT an advertisement for HD buckets

LOL. I didn't think it was an advertisement. At least not one that HD would probably appreciate 😂