Hello, does anyone else have any experience with Preston Eloy's FreedomSoft system?

My business partner and I bought into it  quickly saw its limitations then just as quickly canceled our service  within two weeks. So well within the 30 day trial period.

However, they continue to bill my credit card for the service in spite of the confirmed cancellation.

Has anyone else had any issues like this with them? Of course emails and phone calls are going unanswered. It would seem the only contact they are able to make is between their bank and my credit card.

Any insight or advice would be greatly appreciated

report card as stolen and replace, i do that on all cards every few years help with identify fraud also

I really wanted FS to work. The idea is brilliant. It really is. However, I found that about 1/3 of the emails I sent through the system never reached the recipient. I was having issues with it being buggy and crashing. The websites were up and down all the time. I called their tech support only to be told they would submit a ticket. There was no one in tech support I could actually chat with. When they did reply, they used mostly useless canned emails.

The idea is brilliant, the product isn't ready yet though. At least in my experience. My biggest issue was the fact that I couldn't count on emails actually getting through. Oh and people would fill out buyer or seller forms, and they would never populate. They just vanished like they were never filled out. That's no Bueno business.

Anyhow, I removed my info back in February when I left it. This time, I called every number I had for them. In the past when you called, you got a touch one for billing  touch two of whatever touch three for tech support. Now it's just a general mailbox. That seems suddenly shady.

My bank is reversing the charges and blacklisting them.

Like I said, it's a shame as I really had high hopes for this working.

Maybe I'll find something else someday. For now it's basically Google forms and self built websites.

I am currently using Investorfuse, which has been great.  It is a podio based crm with lots of cool abilities.  However I tried Freedomsoft just to pull down cash buyer data to see where to market, and I was impressed by what they say it can do.  Glad that I searched BP as it looks like I will be sticking with Investorfuse.

I am so glad I saw your reply as I checked out Investorfuse and it's exactly what I am looking for!!

Yikes, sorry to hear! Hope you get your money back.

FreedomSoft doesn't do anything but monetize CL and other obvious public info for their benefit. I've never been amenable to systems that insist on a monthly tax on my business. And crashy too?:\?!

Thanks BP for giving me the info I need to avoid trash products!

How does the automated lead generation work?  I couldn't find anything too specific on the site.

Account Closed You can do automated lead generation in several ways, depending on whether you're looking for seller leads, buyer leads or private lender leads.

Seller Leads: (1) Lead Swiper (online lead search with dozens of targeted searches), (2) Instant Leads -- direct access to listed properties nationwide with a click (3) OfferBot, automated offer making software (I use this every day) (4) Direct Mail Connect (upload your own list or use lists out of Freedomsoft) -- my team manages a ton of direct mail in my real estate business using this, (5) SMS lead generation (I use this every day)...and that's just scratching the surface.

Buyer Leads: (1) Nationwide Cash Buyer database (millions of buyer records at the click of a mouse) -- including buyer name, address and all property addresses they've bought including closing dates and prices paid.  (2) You can also use Lead Swiper to target buyers online.

Private Lender Leads: (1) Lead Swiper can easily target private lender leads (2) Nationwide Private Lender database (although this is 1-time payment premium feature, it's cheap), if you want access to capital, quick and easy, it's a no brainer.

Thanks for the information.  Do you have an associate I could speak with further.  I would like to inquire further but don't think the form is a good median for doing so.

Bigger Pockets censored my past my post about the  software from Freedom Soft. Check out our comments on Pissed Consumer for more about this poor excuse for real estate investing software.

Relighting this thread, anyone use Freedomsoft (FS) in 2018 or 2019? I have been an avid Podio user but I really do like the interface and offerings of FS. There offerings seem better than in past years: 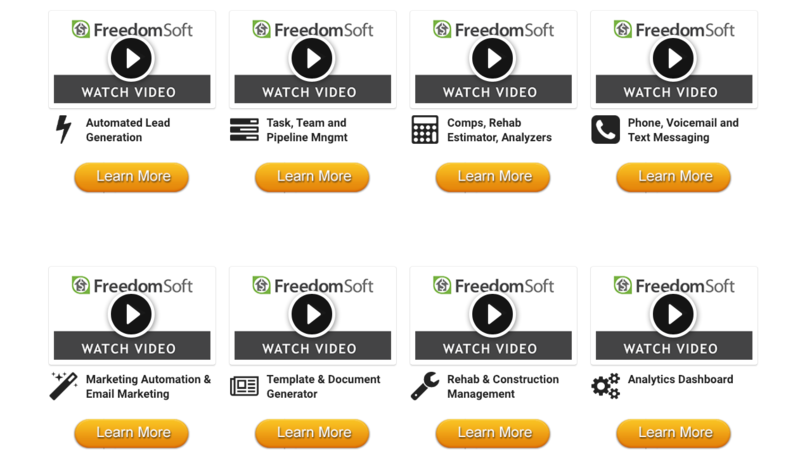 was wondering the same thing ...

Relighting this thread, anyone use Freedomsoft (FS) in 2018 or 2019? I have been an avid Podio user but I really do like the interface and offerings of FS. There offerings seem better than in past years:

I just saw the webinar, and had to do a search on ratings before it was over. It's a really sexy application on webinar, but even for the "Get It Now" price may not be worth it if you can't shut it off in a timely manner.

Who knows this app for an opinion?  Freedom Soft?

Just asked this question in a FB group.  Really need a crm. And I like the project management function also.   looking to pull the trigger soon.

Think I am going to give Freedomsoft a try, will keep you guys updated in the following weeks of how it goes.

Think I am going to give Freedomsoft a try, will keep you guys updated in the following weeks of how it goes.

Hey Justin, just following up on this post. Looking into using Freedomsoft

Any updates on Freedom Soft?  Loved the video on the site and the real time sms option.  I've been doing D4D with Deal Machine and my own postcard campaigns.  Have gotten very little responses.  Looking to upgrade my game and speed is of the essence. I am a firm believer of sms.  Please update the community with any Freedom Soft reviews.

Yes, any updates from FreedomSoft users would be greatly appreciated!! I will be participating in the webinar this Saturday to learn about the platform.

Log in or sign up to reply
Related Resources Real Estate Guru, Book & Course Reviews and Discussions
Don’t Invest Without Understanding the Risks—Here’s What You Need to Know
Single Family vs. Multifamily Rentals: Which Investment Is Right for You?
Maximize Your Tax Returns This April With These Smart Maneuvers
How to Start Investing In Real Estate at a Young Age (or a “Young at Heart” Age)
Why It’s Almost Always a Bad Idea To Invest in Real Estate To Save Money on Taxes
Resources Read, see, and learn more!
Real Estate Investment Calculators
BiggerPockets Blog
Path to Purchase
Mortgage Loans
Find a Contractor
Real Estate Agents
Hard Money Lenders
Real Estate Listings