So I just joined Buildium, spent hours setting everything up, it seems mostly pretty great, except one HUUUUGE issue that is making my head explode...they don't support credit card tracking?!?!?  WHAAAT??  This totally would have been a deal breaker had I known before signing up, but now I'm too far into it to turn back, so I need to make something work.  How are other Buildium users out there handling this?

I contacted Buildium and they confirmed they do not offer credit card tracking, but offered a workaround which was to set up a credit card as a bank account, and when there is a balance it's just always negative in the bank account, and this would allow you to track individual purchases like it was a checking account.  The problem is, that's not proper accounting because a credit card is a liability, and doing this workaround will reduce your assets rather than increase your liabilities, which totally messes up your balance sheet and debt-to-income ratios.

When I pointed that out, they suggested I instead setup my credit card as a vendor, and enter each charge as a bill, which would then fix the assets and liabilities issue.  The problem with that is that now you're no longer tracking what you've paid to actual vendors, so you lose the ability to issue 1099's and know what you've paid who at the end of the year.  Oh, and both of those solutions are a giant PITA also, so there's that.

Surely others have this issue and have figured out a workaround, any suggestions???

Are they able to set-up your credit cards as additional "accounts payable"?    We had an accounting system once that necessitated doing this - not ideal, but it keeps the assets and liabilities straight and AP is just an accrual until you pay the bill.

@Ryan Vienneau I'm a Buildium customer too, and it blows my mind they don't have credit card tracking in 2017. I wish I had another work around for you, but I actually stopped using my business CC all together just to avoid the PITA "hacks" they offered as solutions.

I don't know if you've played around with the feature request portal (it's under Help and Support in the top right, then Suggest a Feature). There is already at least one request with a lot of votes for this feature, and you can allocate your "votes" to it as well...maybe Buildium will start work on it after it gets a few hundred more votes.

@Ryan Swan , funny you say that, I just used all of my votes on that one feature last week, which kind of sucks because I wouldn't consider that an "enhancement" as much as just a total whiff on Buildium's part.  I MAYBE could understand if they just hadn't gotten around to having automated credit card tracking like every other accounting software on the planet, but to not even have the option to track them manually is ludicrous.

That feature is so basic I never would have thought to even ask first if it was included.  To me it would be like asking "Is there a feature to reconcile accounts?" or "can you create an income statement?" I mean, it's such a critical, basic, and SIMPLE feature I don't get how it's not there.  Anyhow, yeah, I voted for it pretty hard.

@Roy N. , that's a good idea, I'll try that and post if its a possible workaround.  I even tried entering charges as manual journal entries, but even that doesn't work because you can't track each vendor, just the credit card.

@Roy N. , unfortunately, to add to the frustration, Buildium's journal entries do not allow you to enter a vendor for the expense, you can only select which GL Account to debit and which payable to credit, so I'd still be stuck not able to track vendors for 1099's, see below.  I'm tempted to do what many have said which is to just use a debit card, but I get 2% back on a CC, which is not insignificant when managing dozens of vendors, and I really hate to change a process that's working because the software I chose is lacking a basic feature.  It also makes me wonder how many other issues I just haven't noticed yet will come to haunt me.  Too bad AppFolio won't return my calls or emails... 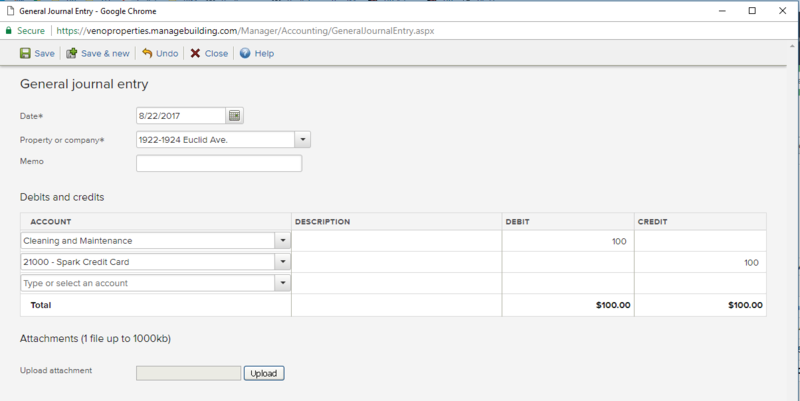 If you are able to setup a credit card identical to your accounts payable accrual account, it should operate the same.  Invoices go into the CC account the same as they would in the AP account and are attributed to the vendor who issues them.

When you pay the invoice/expense in the AP queue (i.e. transfer funds from your operating account to the AP/CC account) it show as a payment for a specific expense/invoice?