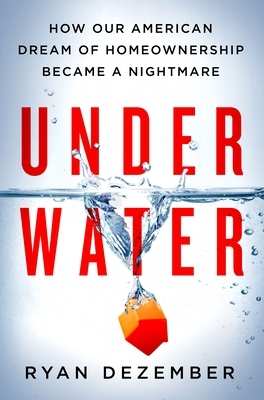 Under Water: How Our American Dream of Homeownership Became a Nightmare' is a new book by Ryan Dezember, a Wall Street Journal writer and is a sharp & timely reminder how hot real estate markets can go drastically wrong for some homeowners and real estate investors. Ryan adds his own personal struggles of homeownership after he purchased a modest home in the 'Redneck Riviera' of Alabama. He was forced into becoming a reluctant landlord himself. A combination of a divorce, his home losing nearly half of its market value, his neighborhood demographics changing (one of his tenants used the house to sell prescription drugs out of) and having to relocate for a better paying job left him stuck with a house he couldn't get rid of. His own personal ethics prevented him from just walking away from the property.

Other parts of the book cover the players in the local real estate game including real estate agents, developers, and city officials. Buyers were buying scooping up and flipping new condo units before a shovel was even in the ground at some of these developments along the Gulf of Mexico. The real estate speculation was at a fever pitch and some buyers got stuck holding the bag.

One other aspect of the book I enjoyed is about the entry of the corporate investor into the single family real estate market. Companies like Blackstone, Invitation Homes, Zillow, and OfferPad have entered the market as major buyers in certain parts of the country, squeezing out the small time investor looking to make a few bucks on a flip or buy & hold, or even the first time buyer trying to purchase a home for their family. Their entry into the market has also caused rental increases in the areas they invest in hurting the ability for some families to live in safe, desirable neighborhoods with quality schools.

Another takeaway from the book is how what happened in the heated Alabama/Florida Panhandle area relates to your own local real estate market. I had a friend who purchased a pre-construction townhouse in Bayonne along the Newark Bay. The developer's brochure showcased beautiful blue waters with sailboats and your own chance to buy in early and make some quick money. In reality, the complex took longer than expected to build, the market tanked, the Newark Bay was black & smelly, and he got stuck being a landlord for 10 years with the rent money barely covering his mortgage, taxes, and HOA fees.

There is a lot to learn from this book and its an entertaining read for any Bigger Pockets fan!

Welcome! Its on Audible too!

Thanks for the book recommendation @Kevin Hill ! I'm definitely going to put this on my "to-read" list (and first try to finish the several books I'm still in the middle of reading haha).

Nice. Thanks for this