Two adjacent units (in Los Angeles) have reported and caught numerous mice over the last three weeks. Never had rodent issues before. I haven’t seen food left out in either unit, they are generally pretty tidy.

I’ve sprayed the perimeter of the building with rodent repellent, and have laid out baits and traps inside. The bait hasn’t been touched, but the glue traps are catching something like 5 mice a week! The other unit has also caught some with a live bait trap (she drops  them off at the park, several miles away)

Is it time to call an exterminator or should I keep putting out glue traps and hope they goes away?  I mean, that’s a pretty steep rate of death, even for mice.  I expect the exterminator will just put out more bait and traps, and charge an arm and a leg for it, but it doesn’t seem like my efforts are enough.

I’m surprised by the scale of the infestation and how suddenly it happened - is this typical?

The exterminator can get expensive, but so is going to the property all the time and putting traps.

I think what needs to happen is, along with what you are already doing, to plug/cover all the holes around the property. A tiny hole is enough for mice to get in. I'm not trained to do this, so if I were you, I would call a professional exterminator.

I have a rental in the country we've been renovating. I saw fresh evidence of mice every week even though the house had no food or water source. I built bait stations using PVC pipe, simpler than what this video demonstrates. I placed four of them on the exterior of a 1,400 sq.ft. home and I set a couple glue traps inside the home. 75% of the poison was consumed in a couple weeks. I haven't seen any evidence of mice inside or caught any on the glue traps.

As long as they get into the poison outside, it should prevent them from ever seeking food inside.

Thanks! I put out more glue traps, and a different kind of bait. This one is a green block that sits in an enclosure, similar to what you described. Let's see how that works out.

The perimeter looks sealed to me, but they probably burrow in from somewhere in the yard. I've read they hate the smell of mint, so I'll put out some mint-based repellent pellets under the stove, fridge, etc.

As long as they get into the poison outside, it should prevent them from ever seeking food inside.

I never thought of putting them outside, that sounds like a good idea. Thanks!

Tackle the mice in the house and out.

Whatever you do...don't use poison. I had a rodent issue inside my house that i thought was mices but ended up being a rat a size of a pair of 10 shoes. I kept feeding it that peanut butter poison i bought from amazon. It took about 3 weeks but one of them died in my living room floor one morning. His remaning family died inside my walls and my house stunk for weeks. Even a year after i am still have flymaggedon issues where out of no where my house will have hundreds of flies. Basically they are still consuming the flesh from inside the walls and maggots end up being flies. I didn't research it ahead of time but if they die inside your walls your pretty much stuck with them unless they decompose which takes a lot of years.

@Aleko Petkov . Do you feel the self-help remedies are working? If not, then at some point a disgruntled tenant could argue that you have, effectively, ignored the problem. Warranties of habitability may come into play. Also, if the Tenant’s personal property is damaged due to the infestation, you may have another issue on your hands. Do yourself a favor and call the professionals.

FYI, I once called a professional for this property that I manage, and it was over $1,000. It came with 1-year guarantee. The more I learn about this, the more I feel like just putting traps/baits inside won't do the job. You have to plug all the entry points with long lasting material.

I found a small hole in the drywall in a corner, and patched it. Hopefully that will stop them coming in. Meanwhile the traps continue to catch 1-2 mice every night. I found out the tenant has put away the bait traps I gave them because they don't want the mice to die in the walls and stink. That's a reasonable concern, but I explained that without poison the only alternative is the traps. We put them back out.

I'm still optimistic they'll leave or die out soon, but the tenant is getting tired of picking up dead mice so I am getting quotes from local exterminators. I'm sure they can expect even more dead mice after the exterminator shows up, but at least I've done what I can.

Mice issues are frustrating but poison and traps are the best mitigation. We had a mousageddon in my childhood home once. They ate all the labels off the cans in the pantry and we started putting out traps. We caught 20 mice in a 24 hour period. We'd set two traps in the kitchen cupboard and a few minutes later would hear "snap" and then sometimes within seconds the second trap would be tripped. Went in there, reset the traps and repeat. Never saw anything like it before or since. This was in a home that did not have a chronic mouse problem. So I think if you aggressively pursue these little varmints, you'll prevail. (a half jellybean is a great mousetrap bait.)

Lots of great advice here.  They are looking for food/water/shelter.  I have a similar on-going problem in a duplex in Boston.  The key for me is to find and seal off their entry.  One tricky one that stumped me for a while - I had sealed off any holes around the perimeter but they were getting in via a small space around the main water supply pipe!  They had somehow tunneled down to where it enters the basement.  I sealed that off (from inside the basement) and the problem stopped.

1. Secure any food/water source they are attracted to inside (be sure tenants are properly bagging trash, etc.).

2. Seal off any hole, no matter how small, around the perimeter.

3. Set traps inside until they’re all exterminated.  Poison is effective but they can die and decompose in the walls as David described above.

4. If its taking up too much time or you live far away call an exterminator.  Your tenants will have a hard time being upset if a pro has been hired.

@Aleko Petkov I have dealt with mice and rats both, and one of my buildings in Berwyn, IL has had a consistent rat issue for almost two years. Mice are pretty dumb and you can catch them on the cheap sticky traps. For rats, you have to use much larger traps and they seem to be a lot smarter. The ones in my building seem to have figured out not to eat the bait/poison and they also have avoided dozens of traps.

My exterminator told me that prevention is the key. Find where they are entering and plug the hole with steel wool (or wood, brick, etc). Next, place traps along wall edges and try to create pathways for where you think they are. Don't use bait as this just will draw bugs. Just put the traps so that they have to step over them.

I live in the surburb parts of Long Beach in Los Angeles and had a family of these living on my 3rd floor. He actually looked kind of cute but every night i would hear a party going on upstairs. I felt bad for the little fella but he was laying droppings everywhere each night and causing a mess. 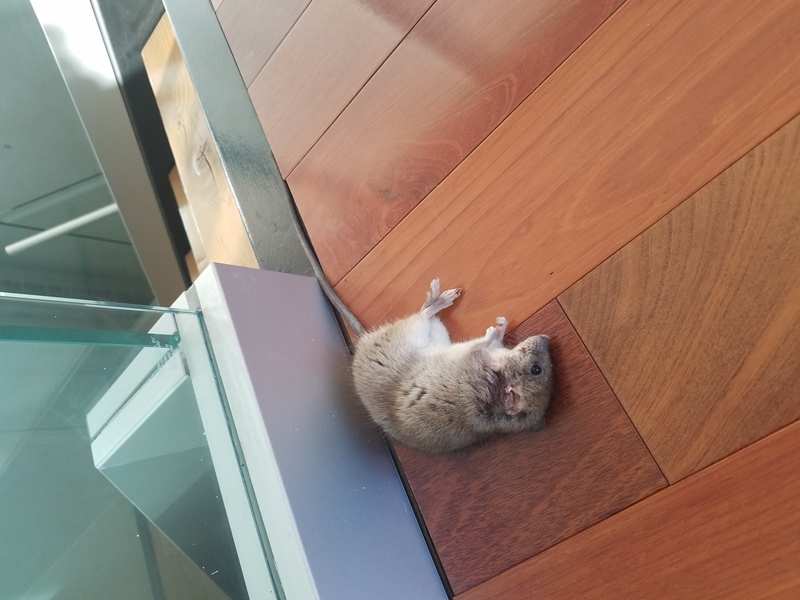 I bought a house that had evidence of a horrible infestation.  Thousands of droppings all over kitchen cabinets and every window still.  I think previous owner had an exterminator put down poison outside and block entrances with wire mesh.

I'm surprised no one has mentioned cats.  A couple months after I bought the place the mice came back in droves. I battled them myself for a year and hired an exterminator but nothing really worked. One day I had one stuck in my cereal box.

I immediately went out and bought 2 kittens.  I haven't had any issues since.  I understand why too. When the cats caught the mice who were there initially they tortured them for hours.  No training required.

@Connor O'Brien - Let's just say cats may work but not a realistic solution for most of the time. You should check out Mice Mob. I have no relationship with them, but they did a great job in the past when I had an issue.

Update: The exterminator quoted me $2,000 to cover gaps (under kitchen counters, inside cupboards, etc) in the kitchen and bathroom in three units, and to put out more traps. I am going to have my handyman do that work instead.